Arbeiter in U.S.A. [The Worker in the United States] 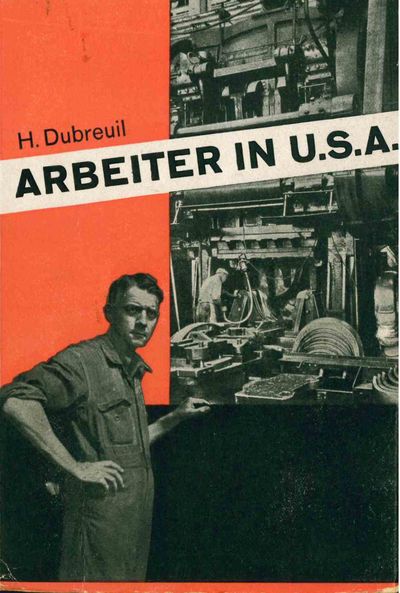 by Dubreuil, Hyacinthe and Jan Tschichold, designer
Leipzig: Bibliographisches Institut, [1930]. Octavo (18.5 × 12.5 cm). Original pictorial wrappers; 364 pp. Original photomontage and typographically illustrated wrappers by Jan Tschichold. Very minor soiling and edgewear. Ex-libris copy with rubber stamps to title page ("Karl Eidiner, Ingenieur"). Scarce work on American industry and laborers as seen from the perspective of a Frenchman, being the 1930 German edition of the 1929 original in French titled Standards - Le Travail Américain vu par un Ouvrier Français, detailing Dubreuil's own experiences working in American factories in 1927 and 1928, where he was impressed by the organization of the work and the standard of living of the American worker, as well as the collaborative and less typically hierarchical climate he encountered in American businesses. Dubreuil was a trade unionist and member of the CGT (Confédération Génerale du Travail) who in 1912 became Secretary of l'Union des ouvriers mécanicien da la Seine, then Secretary General, before becoming the secretariat at l'Union des syndicats de la Seine. In 1931, Dubreuil distanced himself from the CGT and joined the International Labor Office. This work became hugely popular, selling 30,000 copies in France alone. See Jackie Clarke, France in the Age of Organization (2011). As of November 2019, KVK and OCLC show six copies in North America. (Inventory #: 50062)
$850.00 add to cart or Buy Direct from
Bernett Penka Rare Books
Share this item