[Manuscript Ledger Account of the Birmingham Iron Works in Pittsburgh, Recording Workers and Their Wages] 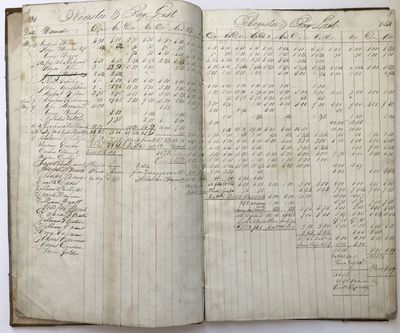 by Birmingham Iron Works
Pittsburgh, 1841. About very good.. [48]pp. Large folio. Contemporary half reverse-calf and blue paper boards. Wear to corners and spine ends, boards soiled. Leaves reinforced at gutter margin with tape, some light soiling. In a clear and legible hand. This ledger records the register and pay information for approximately thirty-five men who worked at the Birmingham Iron Works from 1836 to 1841. The "Register of Hands That Work by the Ton" records each man's name, his wage, days worked, how much tonnage, and his job description. The Iron Works supported an engineer, a blacksmith, a watchman, refiners, heaters, carters, rollers, puddlers, bricklayers, and some men simply described as laborers. The number of employees varies from year to year, ranging from thirty to forty-five or so, with many men listed as steady employees year after year. Also tucked in the front of the volume is a slim gathering of sheets labeled in manuscript as "Balance of Property Debts Goods & Chattels of the firm of Hoge & Hartman, Iron Manufacturers, Pittsburgh, Jany. 2nd 1840." This lists receivables and debts for that company, which was one of several iron works in the area by 1840. Located south of the Allegheny near 16th Street, the Birmingham Iron Works was founded in 1836. It had twenty single puddling furnaces, five heating furnaces, and produced bar iron, rounds, hoops, bands, and other forms of iron. There works were active from 1836 to 1871, and averaged 9,000 tons of production per year. This ledger therefore encompasses the first years of its operation, and is an early record not only for the company but for the region in terms of iron production, which would eventually lead to the steel boom that made Pittsburgh prosperous -- and Andrew Carnegie insanely wealthy. An excellent source for the labor history of the steel industry in Pittsburgh. (Inventory #: 754)
$1,750.00 add to cart Available from
McBride Rare Books
Share this item