Tribute of the Chamber of Commerce of the State of New York to the Memory of Horace B. Claflin 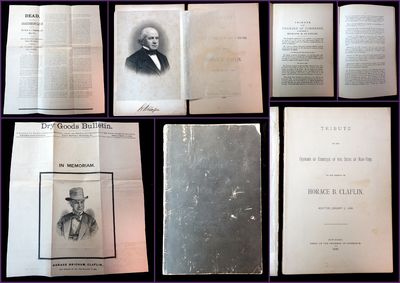 by Press of the Chamber of Commerce
New York: Atlantic Publishing & Engraving of New York, 1885 - 1886. This was a dry good business that acted as middlemen between the manufacturers and retailers of dry goods. Additionally, he founded the Continental Bank of New York in 1870 along with Jacob H. Schiff, Marcellus Hartley, Robert L. Cutting and Joseph Seligman.. Two items advertising the memorial of Horace Brigham Claflin who was an American merchant who founded the Bulkley & Claflin Company (later after Claflin's death it became known as H. B. Claflin Company). Over the years this bank was acquired many times, and is still in existence today under JP Morgan Chase. The first item is apparently from the Dry Goods Bulletin which serves as an memoriam/obituary for Claflin. The front side has an engraving of Claflin as well as his birth and death dates (December 18 ,1811 - November 14, 1885). The back side has a description of his life. Measures 14 1/4" x 12 3/4". The second item is a 16 pg. booklet done by the New York Chamber of Commerce, that is the minutes of the meeting following Claflin's death as well as a biographical sketch of the man. The booklet states that "Mr. Claflin was one of the great merchants which the present century has produced, and his life and character present a striking illustration of the maxim, 'Act well your part, there all the honor lies.' " (pg. 3) The meeting end with several resolutions, one of which was "the entire community [of dry good merchants] are called upon to mourn the loss, not only of the most eminent member of their profession, but also of a true friend." (pg. 11, #1) This was accomplished when on the day of his funeral "the wholesale stores and commission houses throughout the dry goods district in New York City closed at noon, and business was suspended. That portion of the City usually so active and busy was silent and deserted." (pg. 15) The booklet also includes a portrait engraving of Claflin. Black covers. Measures 9 1/4" x 6" (Inventory #: 29001127)
$100.00 add to cart or Buy Direct from Eclectibles
Share this item