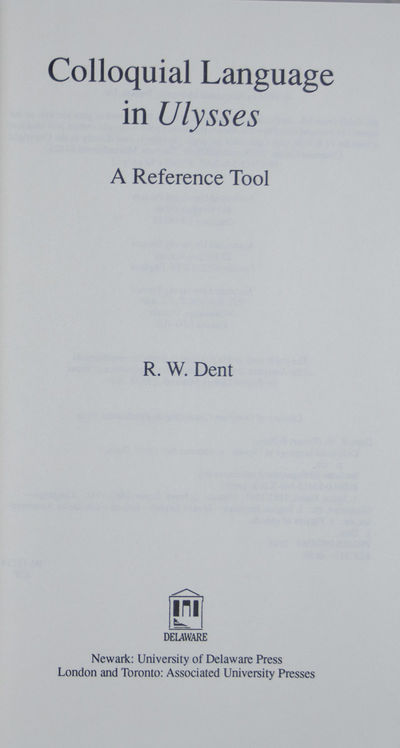 by Dent, Robert William
Newark: University of Delaware Press, 1994. First edition. Hardcover. vg+ to near fine. Inscribed "To Jack Kolb - In memory of earlier stages of the Joyce project - Bob" on front free endpaper. Original anthracite cloth with gilt lettering on spine, in original dustjacket, white lettering on spine. Publisher's device on title page. "For more than half a century, the extraordinary range of vocabularies and styles in Joyce's Ulysses has been an object of critical and scholarly attention. For the better part of a decade, R. W. Dent has been gathering documentation on a single aspect of this work, what may loosely be called the "colloquial language." The result of this research, Colloquial Language in Ulysses, as its subtitle implies, is essentially a reference tool. It uses "colloquial" in the ordinary sense, "characteristic of or appropriate to the spoken language or to writing that seeks the effect of speech; informal." (Publisher). Useful data for Ulysses critics and scholars though hardly attempting to do the work of literary critics. DJ with very light wear along edges. Binding with minor wear along edges. Interior with a closed tear on p.31. DJ and binding in very good+, interior in near fine condition. (Inventory #: 45861)
$120.00 add to cart or Buy Direct from
Eric Chaim Kline Bookseller
Share this item