On the Dynamical Theory of Gases 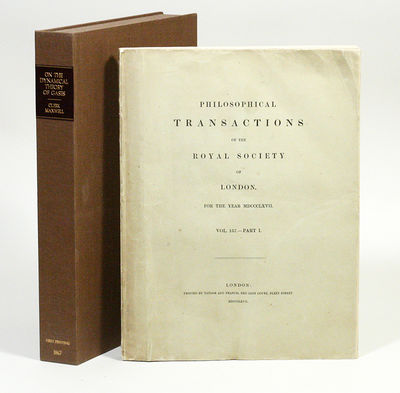 by MAXWELL, JAMES CLERK
London: Taylor & Francis, 1867. First edition. Original wrappers. Very Good. FIRST PRINTING IN RARE ORIGINAL WRAPPERS OF ONE OF MAXWELL'S MAJOR PAPERS: THE MOST DEVELOPED AND COMPLETE EXPLORATION OF HIS THEORY OF GASES. "Ever since his brilliant but flawed paper of 1860 on gas theory, Maxwell had been mulling over new ideas on the topic. In 1866 he brought them to fruition in a paper, On the Dynamical Theory of Gases. His earlier paper had given the world its first statistical law of physics-the Maxwell distribution of molecular velocities-and had predicted that the viscosity of a gas was independent of its pressure," but significant problems remained. Although Maxwell's earlier theory of gases predicted that the viscosity of a gas varied with the square root of absolute temperature, his own experimental evidence contradicted his theory. "The fault seemed to lie in Maxwell's original assumption that when molecules collided they behaved like billiard balls, int other words that they were perfectly elastic spheres. He now tried the alternative assumption that they did not actually come into contact at all but repelled one another with force that varied inversely with the nth power of the separation distance... Some fiendishly complicated mathematics followed... [but] he found two ways to simplify the calculations. "One was to introduce the notion of relaxation time, the time a system takes to return to a state of equilibrium after being disturbed. This is a concept now routinely used throughout physics and engineering... Like so many of Maxwell's innovations, it has become so familiar that one wonders why nobody had thought of it before." The other simplification concerned varying the value of n until he reached simpler relationships that corresponded to experimental results. "Even with these simplifications, the mathematical obstacles were as formidable as those Maxwell had faced when tacking Saturn's rings. He overcame them with such mastery that some scholars consider this the most inspiring of all his works. The young Ludwig Boltzmann, already working on his own first great paper, was entranced." Ultimately, Maxwell "was able to work out formulae not only for viscosity but for diffusion, heat conduction and other properties, which agreed with known experimental results. It was a seminal paper. He had not only corrected and extended his earlier work but had greatly strengthened the theory that gases (and, by extension, all forms of matter) were composed of molecules. Most of all, he had set the theory on a firm base, on which he, Boltzmann and others could build." (Basil Mahon, The Man who Changed Everything: The Life of James Clerk Maxwell). IN: Philosophical Transactions of the Royal Society, Vol. 157 - Part I, pp. 49-88. London: Taylor and Francis, 1867. Quarto (230x300mm), original wrappers; custom box. The complete Vol. 157 (part I) offered; 298 pages and 10 plates. Very discreet repair to front wrapper; minor soiling to wrappers; text exceptionally clean. (Inventory #: 2274)
$2,900.00 add to cart or Buy Direct from
Manhattan Rare Book Company
Share this item