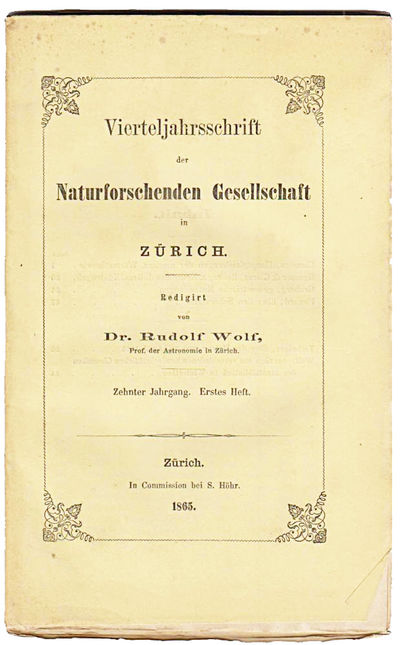 by CLAUSIUS, RUDOLF
Zurich: Jahrgang, Erstes Heft, 1865. First edition. Original wrappers. Very Good. FIRST EDITION IN SCARCE ORIGINAL WRAPPERS OF CLAUSIUS' INTRODUCTION OF THE TERM 'ENTROPY' AND THE CULMINATION OF HIS WORK ON THE SECOND LAW OF THERMODYNAMICS; PRECEDES THE PUBLICATION IN ANNALEN DER PHYSIK. Clausius explains his introduction of the term 'entropy' as follows: "I propose to name the quantity S the entropy of the system, after the Greek word [τροπη trope], the transformation. I have deliberately chosen the word entropy to be as similar as possible to the word energy: the two quantities to be named by these words are so closely related in physical significance that a certain similarity in their names appears to be appropriate." Clausius concludes the present paper with his now classic statement of the first and second laws of thermodynamics: 'Die Energie der Welt ist constant; die Entropie strebt einen Maximum zu.' ('The energy of the universe is constant; the entropy of the universe tends towards a maximum'). "The beautiful symmetry of this statement... did not suffice to impose the [entropy] concept in early thermodynamics. Clausius himself preferred the now forgotten concept of disgregation, which he intuitively grasped as the dispersion of the molecules of a body... the leaders of British thermodynamics judged the entropy concept too abstract and rather reasoned in terms of available and dissipated energy, which directly referred to the human ability to exploit energy sources - and, for Thomson, to God's unwillingness to intervene in the created world. In their treatises on heat James Clerk Maxwell and his friend Peter Guthrie Tate cared so little about Clausius's entropy as to give an erroneous definition of it. "French, German and American thermodynamicists were more receptive to this notion. In the 1870s, the engineer François Massieu discovered that the entropy function could be used to form thermodynamic potentials from which all the thermodynamic properties of a substance resulted by simple derivations; and the American Josiah Willard Gibbs founded the laws of chemical equilibrium on Clausius's entropy law. In the 1880s, Hermann von Helmholtz recovered similar laws... and his disciple Max Planck reformulated thermodynamics on the basis of the energy and entropy laws. By the end of the century, the entropy concept belonged to the standard equipment of well-educated physicists..." (Garrigol, pp. 4-5). The present paper was presented to the Naturforschenden Gesellschaft of Zürich on 25th April, 1865 and published in July. It was then republished in the August 1 issue of Annalen der Physik (Bd. 125, No. 9, pp. 353-400). Although it is the Annalen issue that is referred to by most bibliographies (e.g. DSB), the present issue is the true first publication of this important paper. See DSB III: 303-11 and O. Darrigol, "The origins of the entropy concept", Séminaire Poincaré 2 (2003), 1-12. IN: Vierteljahrsschrift der Naturforschenden Gesellschaft in Zürich, 10, pp. 1-59. Zurich: Jahrgang, Erstes Heft, 1865. Octaco, (223x133mm), original printed wrappers. The entire issue uncut and unopened in the original printed wrappers, an exceptionally fine and fresh copy. VERY RARE IN ORIGINAL WRAPPERS. Note: A custom box is available for this item for an additional $250. (Inventory #: 2276)
$3,500.00 add to cart or Buy Direct from
Manhattan Rare Book Company
Share this item