Speech of Mr. Robert Toombs, of Georgia, on the State of Parties, and the Democratic Platform: Delivered in the House of Representatives of the United States, July 1, 1848 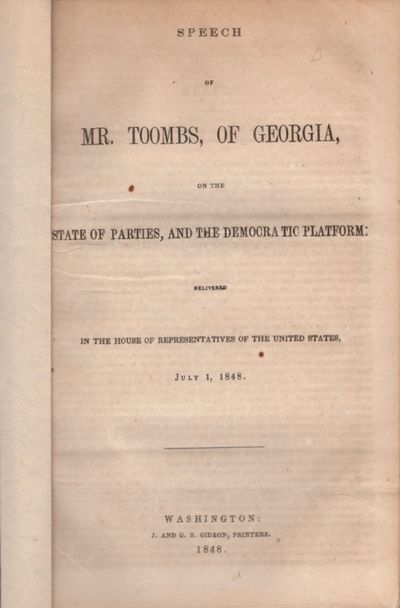 by Toombs, Robert
Washington DC: J. and G. S. Gideon, Printers, 1848. First Edition. Wraps. Very good. Approx. 9.5" X 6" stitched wraps. 16 pages. Newer marbled paper outer wraps. Title on page 1. General Lewis Cass of Michigan ran and lost his bid for President on the Democratic platform of 1848 against Zachary Taylor of the Whig party. Martin Van Buren also ran for President on the "Free Soil Party" ticket which was against the expansion of slavery. Toombs criticizes the Democratic platform and states "Northern Whigs and southern Whigs have stood together, and battled, shoulder to shoulder, without a dissenting voice, from the beginning of this unfortunate controversy to the present moment, against the weak and wicked policy which brought this evil upon us, and against acquisitions by conquest." Although this from wikipedia, the "Democrats chose a platform that remained silent on slavery, and with Cass suspected of pro-slavery leanings, many anti-slavery Democrats walked out of the Baltimore convention to begin the Free Soil Party. Van Buren had burned for the nomination, but he had wanted it on a Free Soil platform. Neither his name nor his stand received any support at the Democratic convention." Scarce. 7 copies of this speech located in OCLC. (Inventory #: 17530)
$125.00 add to cart or Buy Direct from Americana Books
Share this item

The 'Bottari' Project by Kim Soo-Ja