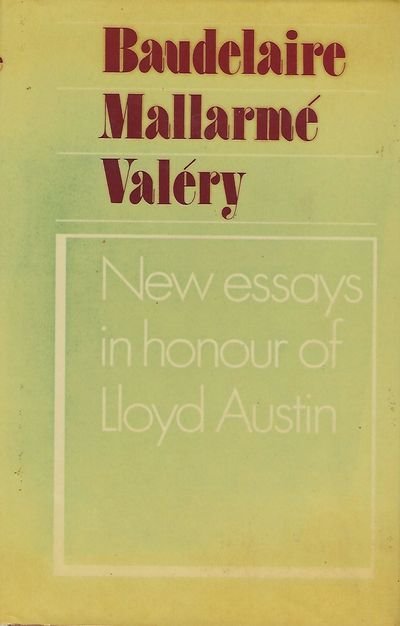 by BOWIE, Malcolm. [With Alison Fairlie & Alison Finch]; Editors
New York: Cambridge University Press, 1982. First Edition. Lengthy signed presentation in French by Austin on the front endpaper." Lloyd James Austin (1915-1994) was an Australian linguist and literary scholar, who worked in Great Britain as a university teacher. These essays, by 27 contributors, were written to honor Austin's completion of Mallarme's "Correspondence". Dr. Jean Hytier was professor emeritus of French at Columbia University and an authority on French literature. Hytier was born in Paris and later served as director of letters for the French National Ministry of Education from 1945 to1947, when he came to the United States. 8vo., brick-red in dust jacket; 456 pages. Very Good (covers nice; contents clean & tight); nice (minor browning & fading) d/j. (Inventory #: 56609)
$125.00 add to cart or Buy Direct from Antic Hay Books
Share this item
Antic Hay Books
Offered by

FLYING THE LINE: THE FIRST HALF CENTURY OF THE AIR LINE PILOTS ASSOCIATION

Washington, DC : The Air Line Pilots Association , 1982
(click for more details about FLYING THE LINE: THE FIRST HALF CENTURY OF THE AIR LINE PILOTS ASSOCIATION)

ONCE UPON A DREAM: A PERSONAL CHAT WITH ALL TEENAGERS

Indianapolis : Bobbs-Merrill , 1960
(click for more details about ONCE UPON A DREAM: A PERSONAL CHAT WITH ALL TEENAGERS)
View all from this seller>