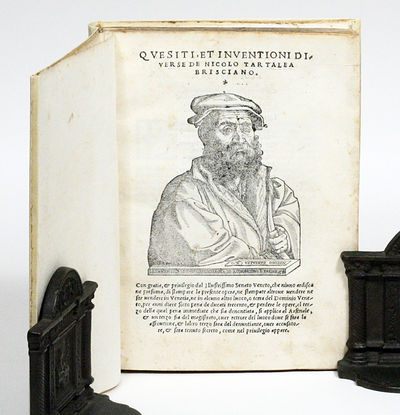 by TARTAGLIA, NICCOLÒ
Venice: Venturino Ruffinelli, 1546. First edition. vellum. Very Good. FIRST EDITION OF TARTAGLIA'S MOST IMPORTANT CONTRIBUTION TO MATHEMATICS, INCLUDING HIS RULE FOR SOLVING CUBIC EQUATIONS. "The 'mathematical practitioners' of the sixteenth and seventeenth centuries seem to be acquiring an important role in histories which deal with the origins of the Scientific Revolution... Those who are fascinated by questions of origins in the history of science and technology find themselves driven more and more to investigate the sudden appearance, as it still seems, of this relatively large and active group. Among the first generation of these practitioners, few made a greater mark than Niccoló Tartaglia, whose works were translated into all the major European tongues, and whose influence in applied mathematics continued perceptibly for more than a century" (A.G. Keller, "Mathematics at Work: Niccoló Tartaglia, Quesiti et Inventioni Diverse"). Tartaglia's Quesiti, includes, without exaggeration, what can be considered the first real advance in algebra since antiquity. It "contains his most important mathematical accomplishment: the independent discovery of the rule for solving third-degree (cubic) equations, a rule first formulated but left unpublished by Sciopione de Ferro in the first or second decade of the sixteenth century. Tartaglia re-solved the problem in 1535 but kept the details a secret for many years, using his knowledge to gain advantage in the frequent public disputations held between scholars in his era. He finally revealed the rule to Girolamo Cardano in 1539 after Cardano swore to keep it secret, but six years later Cardano broke his promise by publishing the rule in his Ars magna ... Tartaglia was incensed at Cardano's breach of promise and abused him roundly in Book IX of the Quesiti, in which he also published his own version of his researches into third-degree equations" (Norman). "Dedicated to Henry VIII, this work contains nine books of questions posed to Tartaglia by various people, and demonstrates his skill in non-mathematical areas: solving problems in the firing of artillery; topographical surveying; equilibrium in balances and statics; a new method for raising sunken ships; etc. In the course of the discussions, some fundamental issues in the theory of motion and of statics are raised, which are elaborated upon in the eighth book ... Among its other important points are the anticipation of the principle of inertia in book three, the observations on the use of compasses in book five, and the solution of cubic equations in book nine" (Roberts and Trent, Bibliotheca Mechanica). Note: This copy does not have the legendarily rare instrument plate only known in a handful of copies, but does have the often-lacking two-leaf table of contents. Venice: Venturino Ruffinelli, 1546. Small quarto (153x214mm), modern limp vellum in antique style, manuscript title on spine. With woodcut portrait and woodcut illustrations in text. Repaired closed tear to upper margin of last four leaves. Occasional light foxing (generally to margins); overall text very clean. A HANDSOME WIDE-MARGINED COPY OF A RARE AND IMPORTANT EARLY MATHEMATICAL TEXT. (Inventory #: 2279)
$6,000.00 add to cart or Buy Direct from
Manhattan Rare Book Company
Share this item