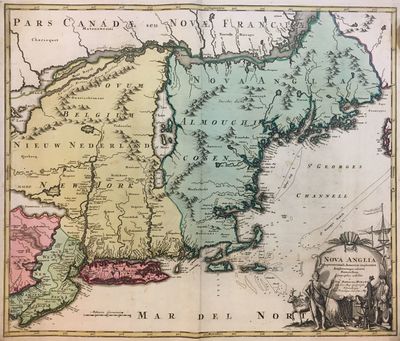 by HOMANN, Johann Baptist
Nuremburg: Homann, Johann Baptist. unbound. Map. Engraving with hand coloring. Image measures 19 1/8" x 22.5". Early map of New England by Johann Baptist Homann dates to circa 1716. Extends from the Delaware Bay to Quebec and the St. Lawrence River and from Philadelphia east to Nova Scotia. Includes New York, New Jersey, all of New England and parts of Pennsylvania and Canada. The map notes American Indian as well as European settlements. Abound with interesting elements, the map is a beautiful example of the many speculations found in cartography at a time when the region was still being explored. Largely focused on fur trade, European settlements were mainly confined to coastal regions. The Hudson remains unmapped beyond Albany, and Lake Champlain is properly labeled. What most likely is modern day Lake George, is here labeled as Lake Iroquois - a name that was earlier associated with Lake Champlain based on the tribe that settled the area. The map also notes some depth soundings near the coast of Cape Cod and Nantucket. Shoals and other coastal features are also mapped here, referencing the regions cod fishery industry at the time. Sennecaas Lacus is what looks like a mismapping of Lake Erie. Zuyd Lac is most likely no more than the widening of the Delaware River while modern day Quakertown Swamp in Pennsylvania is largely exaggerated. The map first appeared in Homann's circa 1716 "Atlas Novus" and was reissued for several decades. Manhattan is identified as N. Loch, which helps identify this map as the second state. Beautiful decorative cartouche shows a European bartering with a Native for an beaver pelt. They are surrounded by an elk, various tools and weapons, with a ship in the background, further focusing on the fur trade. Johann Baptist Homann (1664-1724) was a renowned German mapmaker of the late 17th and early 18th century, including being geographer to the Holy Roman Emperor. His business was carried on through the 18th century by the Homann Heirs, also prolific and popular mapmakers. (Inventory #: 291832)
$1,650.00 add to cart or Buy Direct from
Argosy Book Store
Share this item

Chart of the Pacific Ocean

Henry Teesdale & Co , 1841
(click for more details about Chart of the Pacific Ocean)

New York : Farrar Straus & Giroux , 2000
(click for more details about Greene on Capri)
View all from this seller>