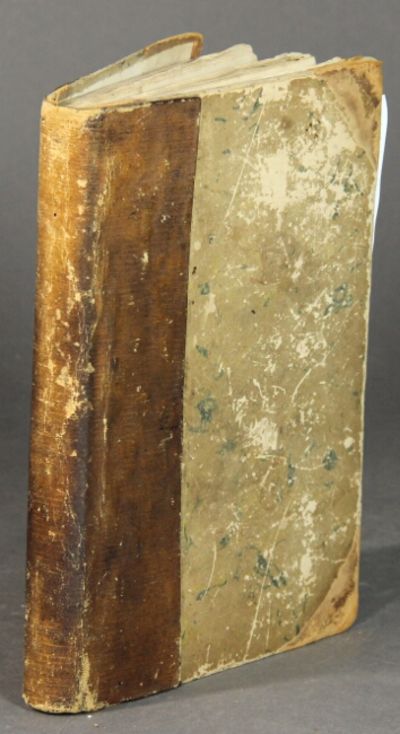 by Murray, Charles Augustus
New York: Harper & Bros, 1844. First American edition, 8vo, pp. 207, [1]; text in double column; bound with: Pickering, Ellen, Miss. The Grumbler. A novel. New York: Harper & Brothers, 1844, first American edition, 8vo, pp. 134, [2] ads; text in double column; old boards with an amateur rebacking in goat; bookplates of Kitty C. Shay and Miss H. E. Clapper, South Bainbridge. Scruffy and worn, a few pages loosening; good. The Prairie-Bird is Murray's first novel. He achieved fame five years earlier as the author of Travels in North America During the Years 1834, 1835, and 1836. which was first published in 3 volumes by Bentley in London earlier the same year. Murray was an English diplomat to America who spent time among the Pawnee Indians. His Travels is an account of that time, and Prarie-Bird, while fiction, draws from his experience to produce a romantic view of the American frontier and native life. Sabin 51489; this edition not in NCBEL. As for Ellen Pickering, she is not even cited in NCBEL, but published 16 triple-decker romances. The Grumbler was also published in 3 volumes in London by T. C. Newby the previous year. This is the last published during her lifetime -- her final novel was published posthumously. (Inventory #: 54534)
$172.50 add to cart or Buy Direct from
Rulon-Miller Books
Share this item