Returning the Western World to Blockade Duty to Squeeze the Confederacy 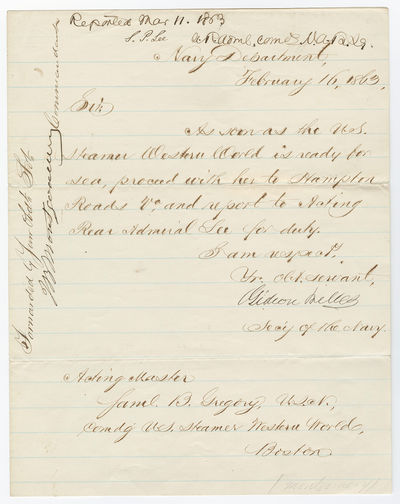 by GIDEON WELLES
The USS Western World served in the South Atlantic Blockading Squadron from 1861-1862. In November 1862, it went to New York for an extensive overhaul. Once complete, by this order Secretary of the Navy Gideon Welles transferred the ship to the North Atlantic Blockading Squadron for service in the Chesapeake Bay. The ship was successful in intercepting blockade-runners, and Confederate President Jefferson Davis offered a reward for Gregory's capture.
GIDEON WELLES.
Manuscript Document Signed, to Samuel B. Gregory, February 16, 1863; Endorsement signed by Acting Rear Admiral SAMUEL P. LEE. 1 p.

Sir: / As soon as the U.S. steamer Western World is ready for sea, proceed with her to Hampton Roads Va and report to Acting Rear Admiral Lee for duty.

Gideon Welles / Sec'y of the Navy.

Gideon Welles (1802-1878) was a Connecticut native, journalist, Democratic state legislator, Hartford Postmaster, and Chief of the Bureau of Provisions and Clothing for the Navy early in his career. In the 1848 presidential election, Welles left the Democratic Party over the issue of the expansion of slavery. Welles founded an influential Republican organ, the Hartford Evening Press, in 1856. Abraham Lincoln appointed Welles as Secretary of the Navy, and Welles was highly effective in mobilizing the resources of the country for an extensive blockade and offensive operations against the Confederacy. Abraham Lincoln nicknamed Welles his "Neptune," and Welles served as Secretary of the Navy from 1861 to 1869.

Samuel B. Gregory (1813-1884), a shoemaker, came from a family of sea captains. He and his brother enlisted in the navy in 1861, and were assigned to the USS E. B. Hale in New York harbor, but were dismissed based on rumors of disloyalty. Returning home, the brothers obtained a petition signed by nearly every voter in Marblehead, Massachusetts, testifying to their loyalty. Commissioned on October 3, 1861, Samuel was assigned to be the Acting Master Commanding of the USS Western World, aiding successful Union patrolling of the Savannah River to prevent and capture blockade runners. (Gregory also put down a potential mutiny late in October 1862. His executive officer, Acting Master Byron G. Pettengill (1823-1869), was court-martialed and sentenced to six months' imprisonment at hard labor.) In March 1863, Secretary Welles ordered Gregory and the Western World to the Chesapeake Bay, where they intercepted blockade runners. Gregory took command of the brig USS Perry in the autumn of 1863, and commanded several other ships during the remainder of the war.

Samuel P. Lee (1812-1897) was born in Virginia, the grandson of Declaration-signer Richard Henry Lee and third cousin of Robert E. Lee. Appointed a midshipman in the U.S. Navy in 1825, his extensive service included combat in the Mexican War. In 1843, he married a daughter of Francis Preston Blair, who in 1859 built a house for the couple next to his own house within a block of the Executive Mansion. Lee was at sea off the Cape of Good Hope when he learned of the beginning of the Civil War. He returned and was assigned to blockade duty off Charleston, South Carolina. He and his crew earned more than $100,000 in prize money. In 1862, Lee commanded one of three gunboats that successfully ran past the forts protecting New Orleans, and he also participated in the naval bombardment of Vicksburg. In September 1862, he was promoted to acting Rear Admiral and given command of the North Atlantic Blockading Squadron. In 1864, he was transferred him to command the Mississippi Squadron, on the Cumberland and Tennessee Rivers.