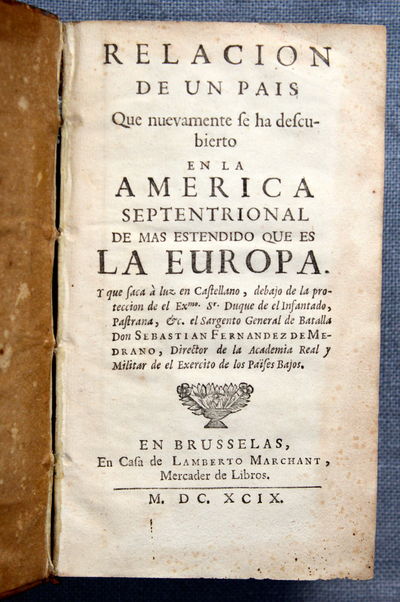 Extremely rare first Spanish edition (the first edition in French is 1697, in English 1698 and German 1699). No auction records traced since 1950. Alden registers 7 copies: John Carter Brown, Library of Congress, Indiana University, American Antiquarian Society, New York Public Library, British Library, National Library (Spain). According to Alden the copies of the the Library of Congress and the National Library are imperfect.
According to the World Cat there seem to be many copies in American libraries, on consulting the actual catalogues of the Institutions cited the majority of the holdings turn out to be "E-books" or microforms (Electronic reproduction. Farmington Hills, Mich. : Thomson Gale, 2011), reproductions of the original from The American Antiquarian Society Reprint, or, on occasion, the reproduction of the text from the "Geografía ... del mundo" of Fernández de Medrano, Antwerp, 1709, t. 2, p. 129-207.

Some of the very few copies in book form are incomplete. The copies in the New York Public Library and the Newberry Library, for example, are wanting the map. The records of a very few of the others are insufficient to determine whether the copy is complete. The only copies I have traced in the USA which are clearly complete are those of John Carter Brown, University of Wisconsin, Indiana University and Buffalo History Museum.
It is certainly exceedingly rare in the market: according to Rare Book Hub and American Book Prices Current, the book does not seem to have appeared in international book auctions in more than sixty years. The last time and apparently the only time that a complete copy came up for auction was at the The Harmsworth Trust Library sale of London 1950. The last records of the book offered by a bookseller is from Maggs of 1928 and is described as: 'The first version in Spanish is exceedingly scarce'.

Lande, writing about the English edition comments 'His work forms one of the most important volumes in the early history of North America. He lived for eleven years on this continent and penetrated farther into the then unknown interior than anyone before him. He was the discoverer and explorer of the upper reaches of the Mississippi and the first to describe Niagara Falls' (p. 423).

The translator, Sebastian Fernández de Medrano (1646-1705), was a Spanish general, mathematician, geographer and Director of the Royal Military Academy of the Low Countries when he published this book. His best known work is an atlas entitled Geographia o moderna descripción del mundo, enriquezida de cartas geographicas (1700).

This abridged Spanish edition of Hennepin had a declared political objective. Just as Europeans had translated Spanish books of discoveries to provide an example to follow, Medrano attempts to do the same by translating into Spanish the discoveries of Hennepin and la Salle in North America. To this end, as Medrano himself states in his introduction, he was interested in offering the Spanish reader only practical information about the exploration and for this reason he eliminated Hennepin's constant attacks against the French which he deemed superfluous. Medrano's edition was a response to the imminent threat that the French would discover the mouth the Mississippi, an exploration that Hennepin and la Salle had undertaken by land. He was aware French were trying to do the same by sea in 1698. He also believed that the British had transported a number of people to New York to prepare them to undertake an exploration in the Gulf of Mexico with the same goal. (Inventory #: 13)
$5,000.00 add to cart Available from Elena Gallego
Share this item

All items are guaranteed as described. If an item is not as described, it is returnable within seven days of receipt, unless other arrangements are made. Full refunds given only when items are received in the same condition in which they were sent. We require new customers to send payment with their order. Customers known to us will be invoiced with payment due in thirty days, unless prior arrangements are made. Institutions will be billed to meet their requirements. All items subject to prior sale. We accept Visa and Mastercard. Please be advised that we can only ship to your billing address. We accept checks, but may require that the check clears before we ship an order. Prices of books do not include shipping. We use FEDEX domestically and internationally. Other shipping arrangements can be made. Shipping is always charged at cost, insurance included. Texas residents must add 8.25% sales tax.
More from this seller