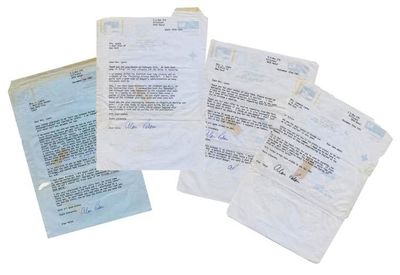 by PATON, Alan
Natal, South Africa, 1980 - 1981. Letters. Edgewear with some chipping and a few stains. Very Good. Group of 4 Letters, SIGNED in full to Sylvia Lyons, comprised of four pale blue airmail letters (7-3/4" x 11-3/4") addressed on the versos with canceled RSA stamps. Excellent content including the current political situation. Some excerpts: 2 December 1980: "My house was not 'off limits' and I never experienced house arrest. This is the most grievous punishment that this government can impose. I suppose you know that it is imposed by a Minister of State and the victim has no appeal to the courts. Something which would not happen in the United States. Less serious than house arrest is what is called 'banning,' which means that you are confined to a certain area, that you are not allowed to attend any gathering, that nothing you say can be published, that you may not enter any court or dock area or school.... I did however lose my passport for 10 years.... I was very interested in your story that 'We Dutch came here with the bible in one hand and a rifle in the other.' There is another equally witty saying, attributed to a black man. He said 'when you came here we had the land and you had the bible, now we have the bible and you have the land.'" From 20 April 1981: "I of course follow the American news very closely and am a reader of the 'Christian Science Monitor.' I don't take quite such a grim view of Reagan's administration as many Democrats must do.... I am very lucky to enjoy good health, but at the moment I am in a kind of limbo, which always happens when one finishes a book and is waiting for its publication." From 22 September 1981: "Thank you for your offer to send me something from New York. That is very generous of you, but it is also extremely risky to make such an offer.... I shall write 35 words on the subject of 'How the Rich and Famous Economise,' and will put them at the end of this letter. I am not rich, but I am not poor. I suppose I am famous, but not in any high category." From 22 December 1981: "It is not in the least risky for you to send me anything, nor is it in the least risky for me to receive anything. It might have been so twenty years ago. You ask what I would like you to send. Well what I really fancy is a brand new Boeing 747 with an Executive Suite!"

Alan Paton (1903-1988) was a teacher, author, and activist celebrated for his 1946 work CRY, THE BELOVED COUNTRY, a work published just before the rise of the separatist National Party in South Africa. Paton, who vehemently opposed apartheid, organized an alternative political party called the Liberal Party of South Africa. He was punished for openly opposing government policy in various ways; in his 2 December 1980 letter, for example, he refers to how the government had confiscated his passport (this upon his return from New York in 1960). Paton addresses his curtailed rights frankly in his correspondence, even going so far as to juxtapose South African policy with American. Sylvia Lyons was the widow of Leonard Lyons (1906-1976), a popular serial columnist who produced 12,000 mostly arts-related newspaper columns over a forty-year period published in the NEW YORK POST under the heading "The Lyon's Den." Leonard and Sylvia Lyons were a dynamic couple who knew dozens of actors, musicians, writers, and Hollywood personalities through Leonard's work as a journalist. Paton is thus assured of Sylvia's interest in literary topics, commenting on popular books of the early 80s -- such as the novels of James Michener -- as well as recent book review projects. Paton published his third novel, AH, BUT YOUR LAND IS BEAUTIFUL in 1981, the same time that most of this correspondence was written. (Inventory #: 019479)
$1,000.00 add to cart or Buy Direct from Charles Agvent
Share this item