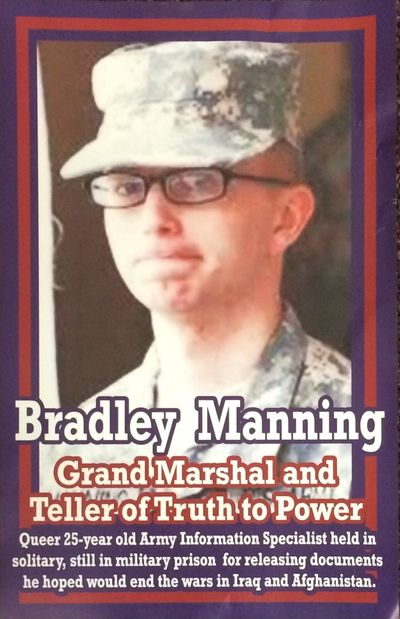 by [Manning, Chelsea; James Baldwin]
n.p.: Inkworks Press, 2013. 11x17 inch double-sided poster, very good, with brief text introducing each figure. In April 2013, Manning was chosen as Grand Marshal (in absentia) of the San Francisco Pride Parade (Daniel Ellsberg, leaker of the Pentagon Papers, would have represented the then-imprisoned Manning in the parade). After the selection was announced, a backlash led the Pride board to revoke the honor, to the relief of some and the betrayal and disappointment of many others. Ultimately, a "Bradley Manning Support Network" contingent marched in the parade, many of its members wearing Manning masks. Small text at the bottom of the side with Baldwin's portrait urges the reader to visit Facebook and search for "10,000 Queer Heroes for Pride. (Inventory #: 241280)
$20.00 add to cart or Buy Direct from Bolerium Books
Share this item