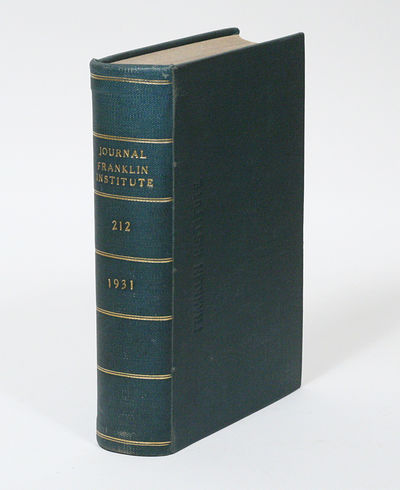 by BUSH, VANNEVAR
Philadelphia: The Franklin Institute, 1931. First edition. cloth. Very Good. FIRST EDITION WITH IMPORTANT PROVENANCE OF THE FIRST REPORT ON VANNEVAR BUSH'S DIFFERENTIAL ANALYZER, THE MOST POWERFUL COMPUTING MACHINE PRIOR TO THE ELECTRONIC DIGITAL COMPUTER. "In 1930, an engineer named Vannevar Bush at the Massachusetts Institute of Technology (MIT) developed the first modern analog computer. The Differential Analyzer, as he called it, was an analog calculator that could be used to solve certain classes of differential equations... Utilizing a complicated arrangement of gears and cams driven by steel shafts, the Differential Analyzer could obtain practical (albeit approximate) solutions to problems which up to that point had been prohibitively difficult. The Differential Analyzer was a great success; it and various copies located at other laboratories were soon employed in solving diverse engineering and physics problems" (Britannica). The "challenge of linking together multiple integrators was not mastered until 1931, when an MIT engineering professor, Vannevar Bush-remember his name, for he is a key character in this book-was able to build the world's first analog electrical-mechanical computer. He dubbed his machine a Differential Analyzer. It consisted of six wheel-and-disk integrators, not all that different from Lord Kelvin's, that were connected by an array of gears, pulleys, and shafts rotated by electric motors. It helped that Bush was at MIT; there were a lot of people around who could assemble and calibrate complex contraptions. The final machine, which was the size of a small bedroom, could solve equations with as many as eighteen independent variables. Over the next decade, versions of Bush's Differential Analyzer were replicated at the U.S. Army's Aberdeen Proving Ground in Maryland, the Moore School of Electrical Engineering at the University of Pennsylvania, and Manchester and Cambridge universities in England. They proved particularly useful in churning out artillery firing tables-and in training and inspiring the next generation of computer pioneers" (Isaacson, The Innovators). Provenance: From the library of the publisher, the Franklin Institute; also the OCC ("Origins of Cyberspace") copy, sold at Christie's in 2005.  In: Journal of the Franklin Institute 212 (July-December 1931): 447-88. Octavo, green cloth with "Franklin Institute" blind-stamped on front board. The complete volume 212 (pages 1-816), complete with general title and index. Very light wear to binding; text fine. A milestone in computer history. RARE. (Inventory #: 2293)
$4,000.00 add to cart or Buy Direct from
Manhattan Rare Book Company
Share this item