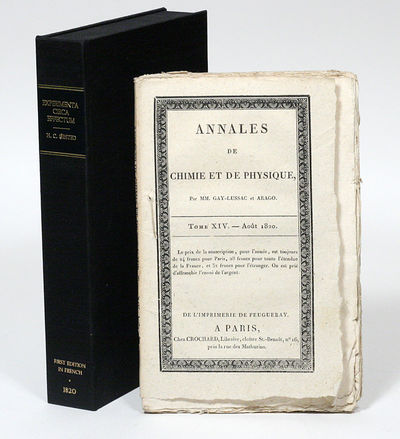 by ØRSTED [OERSTED], HANS CHRISTIAN
Paris: Crochard, 1820. First edition. Original wrappers. Fine. ONE OF THE FIRST TRANSLATIONS OF ØRSTED'S FAMOUS AND UNOBTAINABLE LATIN PAMPHLET ON THE DISCOVERY OF ELECTROMAGNETISM, PUBLISHED IN THE FOLLOWING MONTH IN FRANCE, AND IMPORTANT FOR ITS CONNECTION TO AMPÈRE'S EXTENSIONS OF ØRSTED'S RESEARCH ON ELECTROMAGNETIC PHENOMENA. A MAGNIFICENT COPY IN ORIGINAL WRAPPERS. In July of 1820 the Danish scientist Hans Christian Ørsted announced his discovery that a magnetized needle could be deflected by an electric current. The discovery created a sensation among European savants, and shortly thereafter Ampère extended Ørsted's work by showing, among other things, that parallel current-carrying wires repelled or attracted one another, depending upon the whether the two currents were in the same or opposite directions. A little over a decade later, Faraday showed that moving magnets could induce an electrical current in nearby conducting wires, and by 1865 Maxwell had developed a complete quantitative theory of the relationship between electricity and magnetism.

It was Ørsted's discovery that provided the first hint of such a relationship - a relationship that both stimulated the development of Einstein's special theory of relativity and is now understood as a necessary consequence of that theory. As Nobel Prize winner Edward M. Purcell observed, "Whether the ideas of special relativity could have evolved in the absence of a complete theory of the electromagnetic field is a question for the historian of scientist to speculate about; probably it can't be answered. We can only say that the actual history shows rather plainly a path running from Ørsted's compass needle to Einstein's postulates." Edward M. Purcell and David J. Morin, "Electricity and Magnetism", 3d edition (Cambridge Univ. Pr. 2013).

Ørsted's discoveries were first described sometime between July 10 and 14, 1820, in a little-read Danish literary and intellectual journal, Danske Litteratur-Tidende; and were subsequently described in more detail in a Latin pamphlet dated July 21, 1820, with the title Experimenta circa effectum conflictus electrici in acun magneticam, which was privately distributed to a carefully selected set of leaders of the European scientific community. The Latin pamphlet is now a famously unobtainable rarity. However, shortly after it was issued it was translated into the principal languages of western Europe and as a result became known to a wider audience. Bern Dibner describes these translations as "almost simultaneous" (B. Dibner, "Oersted and the Discovery of Electromagnetism" (1961)), and we have been unable to establish any priority between them - except that the English version in the Annals of Philosophy, not published until October, appears to have been the laggard. (Facsimiles of these translations of Experimenta circa effectum ..., including one into Danish, are provided in Absalon Larsen, "La Découverte de L'Électromagnétisme Faite en 1820 par J.-C. Oersted", published in 1920 to commemorate the centennial of the discovery.) However, the French translation offered here was certainly among the first, and moreover is important because France was the location of the earliest most important extensions of Ørsted's work, by Ampère.

Ørsted's paper describes his experiments on what he described in the original Latin version as "Electricitate, Galvanismo et Magnetismo" - electricity, galvanism, and magnetism. At the time, "[e]lectricity meant electrostatics; galvanism referred to the effects produced by continuous currents from batteries, a subject opened up by Galvani's chance discovery and the subsequent experiments of Volta; [and] magnetism dealt with the already ancient lore of lodestones, compass needles, and the terrestrial magnetic field. It seemed clear to some that there must be a relation between galvanic currents and electric charge, although there was little more direct evidence than the fact that both could cause shocks. On the other hand, magnetism and electricity appeared to have nothing whatever to do with one another." Purcell, op. cit.

"[E]lectricity and magnetism were generally thought of [in the early 19th century] as completely disconnected phenomena. Their causes and effects were utterly different: electrification required a violent action and implied violent effects such as sparks and thunder, whereas magnetism seemed a very quiet force. The magnetizing effect of thunder, which had long been known, was regarded as a secondary effect of mechanical or thermal origin." Oliver Darrigol, "Electrodynamics from Ampère to Einstein" (Oxford Univ. Pr. 2000).

Ørsted, however thought that there might be a connection between the two phenomena. He was an adherent of a philosophical position known as Naturphilosophie, which grew out of certain Romantic and idealist strains in German philosophy, and which held that "there is an eternal and unchanging law of nature, proceeding from the Absolute, from which all laws governing natural phenomena and forces derive." Oxford English Dictionary. As early as 1812, Ørsted had proposed "that experiments with galvanic electricity should be made to find out 'whether electricity in its most latent state has any action on a magnet,'" a proposal that derived from his "belief in the unity of the chemical, thermal, electrical and magnetic forces of nature, a belief showing the influence of Naturphilosophie ...." R.C. Stauffer, "Persistent Errors Regarding Oersted's Discovery of Electromagnetism", Isis 44(4): 307-10 (1953). Indeed, Ørsted himself, writing in 1830 in the Edinburgh Encyclopedia, attributed his early opinion "that the magnetical effects are produced by the same powers as the electrical," to "the philosophical principle, that all phenomena are produced by the same original power." (Some scholars dispute the nature and extent of the relationship between Naturphilosophie and Ørsted's discovery. See generally Christensen, op. cit., at 5-7.)

"The sequence of events leading to his important discovery still remains ambiguous but it seems that one of the advanced students at the university related that the first direct event that led to the publication of Oersted's discovery occurred during a private lecture made before a group of other advanced students in the spring of 1820. At this lecture Oersted happened to place the conducting wire over and parallel to a magnetic needle. Another student related that the experiment concerned the heating of some platinum wire by means of an electric current and that a compass needle happened by chance to be near and underneath the conducting wire." Dibner, op. cit. Although the recollections cited by Dibner imply that the demonstration was a serendipitous accident, Ørsted's own account of his discovery in the Edinburgh Encyclopedia suggests that it was a deliberate attempt to test a hypothesis he had developed. In any event, a small deflection of the needle was observed in the lecture. Following this initial demonstration, he entered a busy period in his personal and professional life, including the grading of student papers and carrying out an assignment for the Danish government on the country's system of weights and measures. By the beginning of July, however, he was able to return to his experiments, using more powerful batteries.

return to his experiments, using more powerful batteries.
"On Sunday, 9 July [1820], Ørsted hired a cab to pick up his old father in Amaliegade. The professor appeared to be in an extraordinarily good mood, and the old pharmacist could not guess why his son would suddenly take him on an outing along the coast to the Royal Deer Park to have a drink. He was bursting with excitement, for he wanted to tell his father about a series of experiments with his galvanic trough apparatus and a magnetic needle. Actually, it was already three months since he had seen the compass needle deflect. At long last he had marked the heap of philosophicum assignments and found time to repeat the experiment he had made before an audience in April. ... Now he had shown that the negative pole of the conductor attracted the north pole of the magnet and the positive one the south pole. If he reversed the electrical poles, the magnet would deflect to the opposite side. In other words, the electrical conductor behaved like a magnet. Hence he called his discovery electromagnetism." Christensen, op. cit.

Ørsted reported that if a conducting wire is placed parallel to a freely rotating magnetic needle, the needle would be deflected in a direction depending on the direction of the current. The effect was not observed, however, if the conductor was placed perpendicular to the wire. (This is because what we now call the magnetic field lines are circular, in a plane perpendicular to the conducting wire.) He also reported that the magnetic influence of the current could penetrate glass, wood, and brass.

After the publication in Dansk Litteratur-Tidende (which generated very little reaction, either within Denmark or outside of it), Ørsted conducted further experiments and prepared the Latin pamphlet Experimenta circa effectum ..., which was dated July 21. It was mailed to 48 European scholars on July 26 and 27. Among the recipients were Humphry Davy in England; Ampère, Arago, Biot, Fresnel, and Laplace in France; and Berzelius in Sweden. Christensen, op. cit. The paper created a sensation throughout Europe. However, as mentioned previously, it was in France that the most important early discoveries building on Ørsted's work were made.

François Arago learned of Ørsted's experiments at a demonstration in Geneva on August 9, 1820, and published a French translation in that month in his journal, Annales de Chimie et de Physique (the item offered here). In a footnote that he added to the translation, Arago stated that "[t]he readers of the Annales should have remarked that we only publish with care the announcements of extraordinary discoveries, and until now we can be satisfied with these reservations. However, as far as the Memoir of M. Oersted is concerned, the results it contains, how strange they may look, are accompanied by too many details to be suspected of any error. I would add that M. the professor de Rive of Geneva, who himself discovered extremely curious phenomena with the powerful voltaic batteries he owns, allowed me to see the verification he made of Oersted's experiments .... I could thus be convinced of the exactness of the main results obtained by the learned Danish scientist." (Translation of Arago's footnote from James LeQueux, "François Arago: A 19th Century French Humanist and Pioneer in Astrophysics" (Springer 2016).)

"Back from Geneva, Arago again carried out Oersted's experiments at the Academy of Sciences [at the Louvre], on 11 September 1820. He spoke of it with enthusiasm to his friends, and looked for batteries for his own experiments. ... Ampère had seen Arago's demonstration of Oersted's experiments at the Academy, and was very excited." LeQueux, op cit. Seven days later Ampère "presented a paper at the Académie des Sciences in which he mathematically analyzed Oersted's work and added some clarifying experiments of his own to prove that an electric current was capable of creating a full and true magnetic field. ... This was then extended to conductors having spiral or helical shapes, indicating the cumulative values of the magnetic forces. ... With this demonstration Ampère had made the great leap forward for he showed that no only could an electric current influence a magnet but it was in itself capable of producing magnetism. ... Until then only the lodestone was held to be the source of magnetic power. A new and more powerful agency for creating magnetism had thus been discovered." Dibner, op. cit.

A STUNNING COPY IN RARE ORIGINAL WRAPPERS OF A HIGHLY IMPORTANT AND INFLUENTIAL PAPER. (Inventory #: 2294)
$9,500.00 add to cart or Buy Direct from
Manhattan Rare Book Company
Share this item