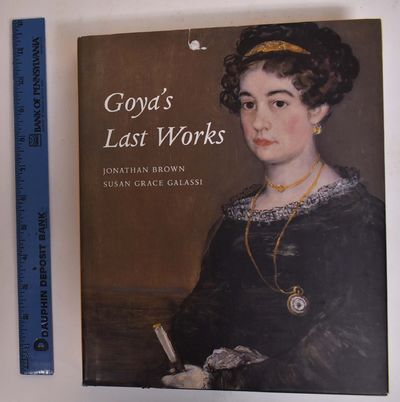 by Brown, Jonathan and Susan Grace Galassi
New York/New Haven: The Frick Collection / Yale University Press, 2006. Hardcover. VG- (Small chip to bottom front cover and top of dj, otherwise crisp and clear.). Black boards with gilt lettering on spine, illustrated dust jacket, 279 pp, profusely illustrated in color and bw illustrations. Issued in conjunction with a 2006-2007 exhibition of later art produced by Spanish romantic artist Francisco Goya (1746-1828). With essays by Jonathan Brown and Susan Grace Galassi. The annotated and illustrated catalogue presents 51 specific pieces. Includes chronology and bibliography. "Francisco Jose de Goya y Lucientes (1746-1828) had a prolific career and spent the last four years of his life in Bordeaux with other political emigres from Spain. In those years and just before his departure from Spain, he created a body of work that is little known to the public and consists of small-scale, intimate pieces, including uncommissioned portraits of friends and family, miniature paintings on ivory plaques, and numerous drawings and lithographs. These simple, bold, and brilliant works attest to the artist's continuing vitality in his old age and also offer some insight into his life during that last period in Bordeaux. They are the culminating achievement of a great artist who was, in his own words, "still learning" as he faced death."--Jacket. (Inventory #: 173001)
$20.00 add to cart or Buy Direct from Mullen Books
Share this item

by Kempers, A J Bernet

Berlin / London : Bruno Gmunder , 2007
(click for more details about Southern Exposure)
View all from this seller>