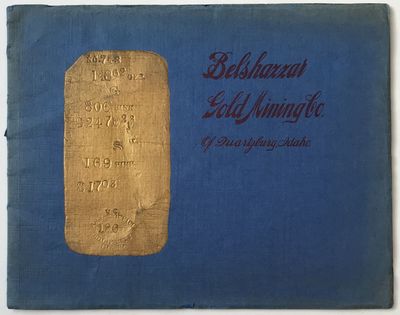 by [Idaho]. [Mining]
[St. Louis, 1907. About very good.. 41pp. Oblong quarto. Original blue wrappers, front cover gilt; stapled. Light wear and soiling, some creasing. Frontispiece torn near staples. Minor soiling and wear internally. Prospectus and promotional for the Belshazzar Gold Mining Company of Quartzburg, Idaho, headquartered in St. Louis. Illustrated with views of the mine and its surroundings, the work contains several testimonial reports as to the integrity and value of the mine describing its geology, improvements, cost, and potential. There are also several maps within the text. The Belshazzar Mine was first discovered in 1875, with other mines in the area, and showed significant ore deposits. The Belshazzar Gold Mining Company was incorporated in July 1906, and mined considerable ore that year. This work, then, is to promote the newly formed company and its operations. Success was short-lived -- the mine closed in 1909, and the company went defunct in 1912. Not in OCLC. (Inventory #: 889)
$850.00 add to cart Available from
McBride Rare Books
Share this item