Report of the Case of Edward Prigg Against the Commonwealth of Pennsylvania. Argued and Adjudged in the Supreme Court of the United States, at January Term, 1842. In Which It Was Decided That All the Laws of the Several States Relative to Fugitive Slaves Are Unconstitutional and Void; and That Congress Have the Exclusive Power of Legislature on the Subject of Fugitive Slaves Escaping into Other States 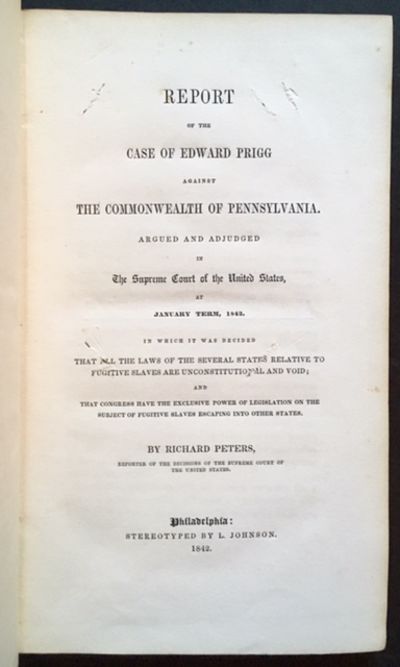 by Richard Peters
Philadelphia: Stereotyped by L. Johnson, 1842. Cloth. Very Good -. The 1842 1st edition of the report of this seminal case brought by "slavecatcher" Edward Prigg against Pennsylvania, a case which not only directly took on the legal question of States' rights (or their reach) to participate in the enforecement of capturing escaped slaves but also redefined the current thinking on the very rights of fugitive slaves. A solid, presentable copy, in its original dark-brown boards, with still-bright gilt-titling along the spine. Loss of roughly 2" (including just a bit of loss to the titling) at each spine end, light staining --and just a touch of very light bubbling-- to the front panel. Light foxing to the preliminaries and copious, scholarly notes --along with a former owner (A.G. Dana) 1844 signature-- in a neat hand along the pastedowns and front free endpaper respectively. Octavo, a significant piece of Americana, as well as an important example of the history of the Supreme Court and of the institution of American slavery. (Inventory #: 17497)
$1,000.00 add to cart or Buy Direct from Appledore Books
Share this item
Appledore Books
Offered by

The Search for the Elements

New York : Basic Books, Inc , 1962
(click for more details about The Search for the Elements)

New York : The Viking Press , 1952
(click for more details about East of Eden)
View all from this seller>