Monogram and Crest Album with Watercolors 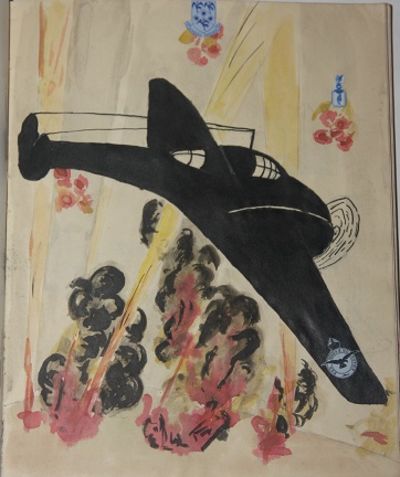 Full Morocco
by Errington, Jane (?)
Full Morocco. Very Good. Comparatively late "augmented" monogram album, with monograms and crests worked into winsomely naive watercolor illustrations often. By late, we mean circa 1910 to 1920, based on the depictions of automobiles from that era as well as airplanes, whereas the augmented, more special monogram albums we have come across before are virtually always squarely Victorian era. 8vo. 23 by 18 cm. 47 leaves with visual content. (Also some blank leaves. All illustrations are on rectos.) Of these, eleven pages are in our judgment more elaborate and/or original watercolors with the crests/monograms worked in, ten are geometric designs onto which the crests/monograms are incorporated, and twelve are simpler and/or more common yet non-geometric pictures with mounted crests/mongrams. (These categories can be elastic, and what we consider simpler, someone else might grade as more elaborate, and visa versa.) In addition, there are four pages of watercolors without crests/monograms, eight pages of pencil sketches of various stages of finishing, and two pages of mounted cut-out illustrations, one of which incorporates crests/monograms as well, the other, not doing so. Some of the more special artwork include a watercolored local map showing fields, a village and a few other structures punctuated with monograms, an Indian scene centered with an elephant, an airplane shown from a strikingly skewed perspective, and a battle scene with tanks, airplanes and artillery. These are all pictures we have never seen the like of in an augmented monogram album, and we would add, even if we had, they would be the most exciting images produced by our amateur artist and compiler. Other pictures he/she did are invariably delightful but somewhat more common, such as a Gothic window, various trophy designs, geometric designs, a cannon and swords, etc. While we describe this album as a monogram and crest album, it is the pages featuring them constitute the majority, but there is some artwork in this album not employing them at all, and some of these pictures also are highly ingratiating, if perhaps betraying the artistic limitations of the artist as well. Also included is an envelope of unused crests/monograms. (Inventory #: 006517)
$2,500.00 add to cart Available from
White Fox Rare Books & Antiques
Share this item
White Fox Rare Books and Antiques
Offered by