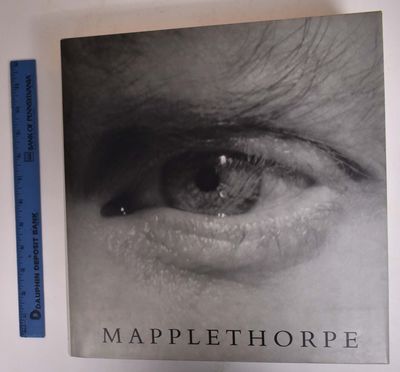 by Danto, Arthur C.
New York: Random House, 1992. First. Hardcover. VG-/VG light foxing on top of text block.. Dove gray cloth boards with stamped lettering. 382 pp. Mainly illustrations. "Robert Mapplethorpe began taking photographs in 1970 with a Polaroid camera given to him by a friend. Nearly twenty years later, when Mapplethorpe died at the age of forty-two, he was considered one of the most important photographers of his time. His elegant and sometimes shocking nudes, the black-and-white portraits, flower still lifes, and images of sexual sadomasochism had been exhibited widely and were the subject of serious critical attention in Europe and America. A few months after his death, Mapplethorpe became the focus of an acrimonious debate over federal funding of the arts when an exhibition of his work was canceled by the Corcoran Gallery of Art in Washington, D.C. The director of the Contemporary Arts Center in Cincinnati, Ohio, was subsequently acquitted of obscenity charges brought against him for presenting the same exhibition." "This is the definitive collection of Mapplethorpe's black-and-white photographs, drawing on the full range of his work, from the early Polaroids to the haunting self-portraits taken shortly before he died. It has been prepared in collaboration with the Robert Mapplethorpe Foundation, which was established by the artist to provide funds for AIDS research and photographic projects."--Jacket. (Inventory #: 173081)
$250.00 add to cart or Buy Direct from Mullen Books
Share this item