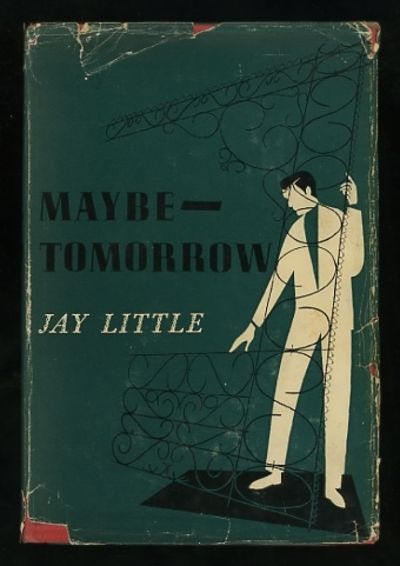 by Little, Jay (pseud. for Clarence Lewis Miller)
New York: Pageant Press. Very Good in Good dj. 1956 (c.1952). 2nd printing. Hardcover. NOISBN . [some foxing/soiling to page edges, spine slightly turned; jacket heavily edgeworn, several small chips and tears]. Early gay fiction, a novel exploring "the inner thought processes of a youth, Gaylord Le Claire, who finds himself developing into a homosexual. As we first meet Gaylord, he doesn't realize why he is unlike anyone else he knows; why he has longings to be near a high-school friend, Bob Blake; why he wishes he were a girl. His unhappiness is intensified by the cruelty of his school friends, who realize before he does what he is and what it means." It takes a trip to New Orleans -- where quite a bit of the novel takes place, and where Gay (yes, that's what he's called, for short) "has met others like himself" -- to spur he and Bob to get together. Cited in Young, 2360 -- an asterisked listing, indicating a "work of primary importance," yet neither the book nor its author (who wrote an additional gay-themed book, "Somewhere Between the Two," published in 1956) seem to have gotten much attention from scholars of the genre, despite the fact that this would seem to be a fairly early positive portrayal (with an upbeat ending, no less) of a young man's coming-out. (There is, however, a very nice essay to be found online entitled "Resurrecting Jay Little," in which the blogger (Brooks Peters?) writes very appreciatively of the book, and relates the story of his own quest to track down biographical information about its author.) . (Inventory #: 16734)
$85.00 add to cart Available from ReadInk
Share this item
ReadInk
Offered by

New York : Henry Holt and Company , 1928
(click for more details about The Low-Down)