Opinions on Various Subjects, Dedicated to the Industrious Producers 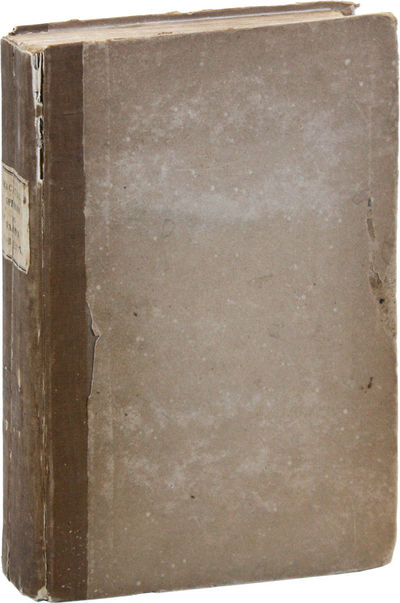 by [UTOPIAN THOUGHT] MACLURE, William
New-Harmony, IN: Printed at the School Press, 1831. First Edition. Hardcover. Notice and errata leaf bound in after Vol. 1 title page, stating that "Six of the following essays were written at Paris, in the year 1819, at the request of the editor of the 'Revue Encyclopedique,' for publication in that work; but they were excluded by the Censors of the press, as too democratic." The repressed essays were subsequently translated into Spanish and published in Madrid, Maclure having travelled to Spain in the hopes of founding an agricultural school "for the common people, in which labor should be combined with instruction" (DAB 12, p. 136). Maclure purchased 10,000 acres of land outside Alicante, but had to relinquish these after the overthrown of Cortes when the land was restored to the Church. From Spain Maclure travelled to Robert Owen's community of New Lanark in Scotland, which in turn inspired him to travel overseas to the Owenite community of New Harmony, where his early articles appeared in the Gazette; the remaining essays were publishing in the "Disseminator of Useful Knowledge" and the "Disseminator," both issued in New Harmony. Along with his writings, Maclure also founded the New Harmony Working Men's Institute, in 1838, just two years before his death. BYRD & PECKHAM 444; HOWES M-162; SABIN 43554; STREETER 4241. Second (and best) issue, text extended to p. 640. Two volumes in one; octavo (24cm.); original muslin-backed boards, printed spine label, leaves untrimmed; [4],640pp. Boards rubbed with some brief exposure at corners and upper cover fore-edge, spine and joints cracked but holding, paper flaw to front pastedown from partially effaced ownership signature, occasional foxing throughout textblock, else Very Good, internally clean and sound. Text ends mid-sentence at end of Vol. 2, though the third volume did not appear until 1838 and is treated as bibliographically separate. (Inventory #: 46259)
$1,500.00 add to cart or Buy Direct from
Lorne Bair Rare Books
Share this item

London : Fitzroy Dearborn Publishers , 2001
(click for more details about Reader's Guide to Military History)
View all from this seller>