On the Mechanical Performance of Logical Inference [The Logical Piano] 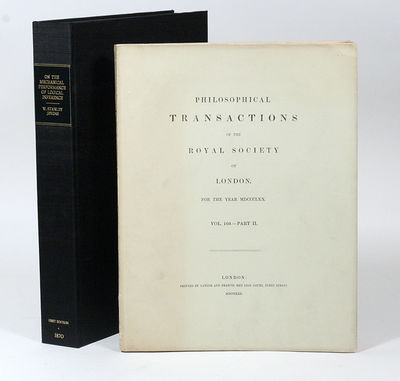 by JEVONS, WILLIAM STANLEY
London: Taylor & Francis, 1870. First edition. Original wrappers. Fine. A LANDMARK IN COMPUTER SCIENCE: FIRST EDITION OF JEVONS'S PRESENTATION AND EXPLANATION OF HIS "LOGICAL PIANO", THE FIRST MACHINE TO SOLVE A MATHEMATICAL PROBLEM AT SUPERHUMAN SPEED. Jevons invented a "logical piano" (so named because it resembled a small upright piano) that could perform, through a sequence of switches, various types of logical calculations. In doing so, he became "the first person to construct a machine with sufficient power to solve a complicated problem faster than the problem could be solved without the machine's aid" (Goldstine, The Computer from Pascal to von Neumann ). "From his thinking on the processes of logical inference, [Jevons] developed the idea that these might be performed mechanically. As early as 1865 he was trying to build a 'reasoning machine, or logical abacus' (Papers, 4.69), which evolved through several stages into a 'logical piano' or logical machine which he demonstrated before the Royal Society in January 1870. He thought it 'quite as likely to be laughed at as admired' (Letters and Journal, 250), but it was later to be recognized as one of the forerunners of twentieth-century computers, and is preserved in the History of Science Museum at Oxford." (R.D. Collison Black, Dictionary of National Biography). "Jevons's logical piano could handle up to four terms and their negations (one per key) and provide all the possible combinations. Its operating principle was one of the most basic modes of thought, the law of duality. Given one to four terms, the machine, using this law, would expand, eliminate, those with contradictions, and churn out the conclusion. In this way, 'the actual process of logical deduction is thus reduced to a purely mechanical form, and we arrive at a machine embodying [Boole's] Laws of Thought." (Margaret Schabas, A World Ruled by Number: William Stanley Jevons and the Rise of Mathematical Economics). "On the Mechanical Performance of Logical Inference," a paper Jevons read before the Royal Society on January 20, 1870, is his most detailed description of this early prototype of the modern computer. In: Philosophical Transactions of the Royal Society of London for the year 1870, pp. 497-518, Vol. 160, Part II (the complete volume). London: Taylor and Francis, 1870. Quarto (9x12 inches), original wrappers, largely unopened; custom box. Complete with 26 plates (3 for Jevons). A FINE COPY. (Inventory #: 2303)
$3,000.00 add to cart or Buy Direct from
Manhattan Rare Book Company
Share this item