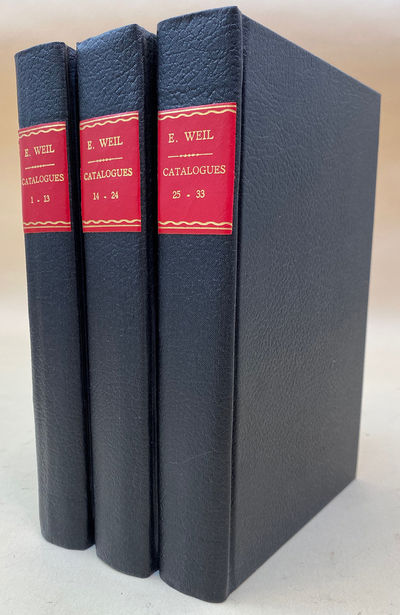 by Weil, Ernst
London, 1943. Weil, Ernst (1891-1965). Complete set (nos. 1-33) of Weil's rare book catalogues. Approx. 1320pp. total. Plates. London: E. Weil, 1943-1965. 218 x 138 mm. Bound in 3 volumes, recent cloth, red leather spine labels; original printed wrappers present. Fine. Herbert M. Evans' Copies, with his purchase notes on the front wrappers of several catalogues and his signature or initials on one or two front wrappers. Typed letter signed from Weil to Evans, dated 19 May 1953, bound into Catalogue 20. First Editions of these important catalogues issued by one of the foremost 20th-century dealers of rare books in medicine and science. These copies are from the library of Herbert M. Evans (1882-1971), co-discoverer of Vitamin E and one of the pioneering collectors of rare medical and scientific books. Many of the catalogues in this set bear Evans's pencil or ink notes on their front covers, and Catalogue 20 (1953?) has a typed letter signed from Weil to Evans bound in, discussing a possible purchase of four items. Ernst Weil, a native of Germany, was influenced by his cousin, the bookseller Heinrich Eisemann, to collect and eventually to sell early printed books. In 1924 he founded with Hans Taeuber the firm of Taeuber & Weil in Munich; in 1933 he moved his family to London, where he entered into partnership with E. P. Goldschmidt. In 1943 he began selling books under his own name, issuing 33 catalogues before his death in 1965. Although modestly produced, his catalogues contain much research and original observation, particularly on hitherto ignored medical and scientific books. See E. Weil, "A doctor and his books: Harvey Cushing and his library. The formation of the Harvey Cushing Collection," Journal of the History of Medicine 1 (1946): 234-246. . (Inventory #: 16547)
$2,000.00 add to cart or Buy Direct from
Jeremy Norman & Co.
Share this item
Jeremy Norman & Co., Inc.
Offered by