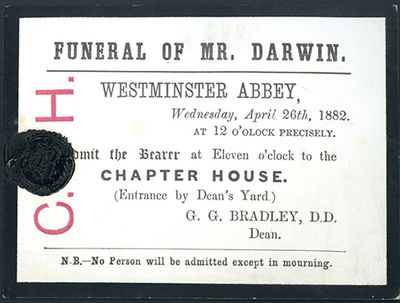 by Darwin, Charles
1882. Darwin, Charles (1809-82). Funeral of Mr. Darwin. Westminster Abbey, Wednesday, April 26th, 1882 at 12 o'clock precisely . . . G. G. Bradley, Dean. Printed card, black-bordered, with the Dean's seal in black wax in the left margin and the letters "C. H." in red ink on either side of the seal. N.p., 1882. 92 x 122 mm. Fine. Darwin had died at Down House on 19 April 1882, expecting to be buried in the local churchyard. His fame and reputation were such, however, that Huxley, Galton and others felt it would be appropriate to have him buried at Westminster Abbey, one of the highest honors that can be bestowed on a British citizen. As Desmond and Moore put it, "getting a freethinker into the Abbey was not easy" (Darwin, p. 666). But Huxley stepped in, supported in Parliament by Darwin's neighbor, Sir John Lubbock, and by a press campaign led by The Standard. The Reverend George Granville Bradley, Dean of Westminster Abbey, was happy to acquiesce. The Chapter House, to which our card allows admission, is where those who were to follow the coffin into the Abbey assembled: "[On] that grey day committees adjourned, judges put on mourning dress, and Parliament emptied as members trooped across the road. From embassies, scientific societies, and countless ordinary homes they came. Under leaden skies they converged on the Abbey, anticipating the awe and spectacle of a state occasion... In the Chapter House, where Parliament had once met, the elders of science, State, and Church, the nobility of birth and talent, stood waiting to file though the cloisters, behind the coffin. They were "the greatest gathering of intellect that was ever brought together in our country," said one' (Desmond and Moore, p. 672). Darwin was laid to rest beneath the monument to Newton, at the north end of the choir screen. . (Inventory #: 45178)
$4,750.00 add to cart or Buy Direct from
Jeremy Norman & Co.
Share this item
Jeremy Norman & Co., Inc.
Offered by