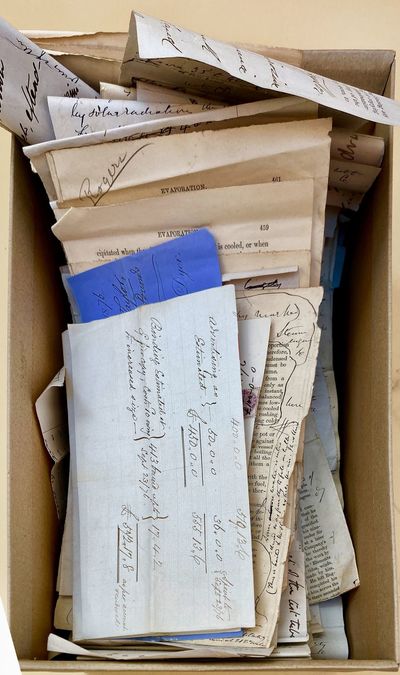 by Taylor, Alfred Swaine; Neil Arnott
1876. Taylor, Alfred Swaine (1806-80); Neil Arnott (1788-1874). Elements of physics, or, natural philosophy. Manuscript consisting of text pages, from an earlier edition, of the book's "Prefatory Note" and Part IV (Heat), sections 554 - approx. 643 and 699 - approx. 716, heavily amended in Taylor's hand, together with extensive autograph additions on separate sheets. Approx. 120ff. N.p., 1876. Accompanied by a cost sheet in a secretarial hand dated 3 October 1876, headed "Dr. Arnott's Physics 7th Edition," plus 3 receipts for expenses related to the book's production. Various sizes. Creased, some dust-soiling and fraying, but overall very good. Autograph manuscript of a large portion of Taylor's contribution to the posthumous seventh edition of Neil Arnott's Elements of Physics, co-edited by Taylor and Scottish philosopher Alexander Bain (1818-1903). The manuscript consists of text sheets of Section IV on "Heat," taken from an earlier edition and heavily revised in Taylor's hand, plus numerous manuscript sheets containing Taylor's additions to the text. Also included are three receipts for expenses related to the book's production, and an itemized cost sheet in a secretarial hand listing the estimated and actual costs of the book's composition, stereotyping, corrections, illustrations, printing, paper and advertising. Arnott, a Scottish physician and inventor, is best known for his improvements to ventilation and heating; his Elements, first published in 1827, was a popular textbook on physical science that went through six editions during his lifetime. Arnott had been friends with both Bain and Taylor since the 1840s and named the two as co-executors in his will. Taylor is best known as the founder of forensic toxicology but was certainly well versed in other aspects of sciences, as he was responsible for preparing the Elements' sections on heat (offered here) and electricity. Bain, Autobiography, pp. 322-323. . (Inventory #: 45099)
$1,750.00 add to cart or Buy Direct from
Jeremy Norman & Co.
Share this item
Jeremy Norman & Co., Inc.
Offered by