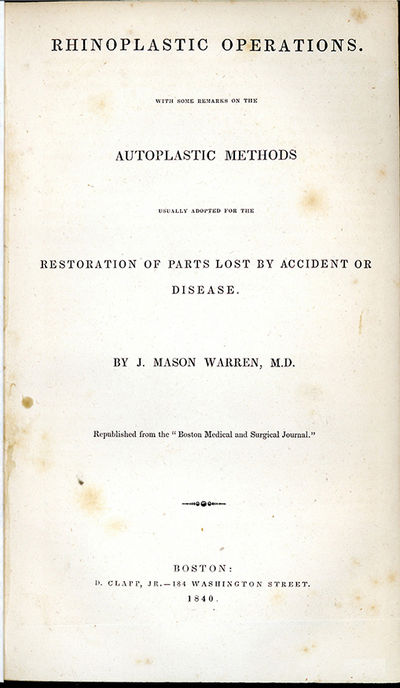 by Warren, Jonathan Mason
Boston: D. Clapp Jr., 1840. Warren, Jonathan Mason (1811-67). Rhinoplastic operations. With some remarks on the autoplastic methods usually adopted for the restoration of parts lost by accident or disease. Offprint from Boston Medical and Surgical Journal 22 (1840). 28pp. 2 plates. Boston: D. Clapp, Jr., 1840. 214 x 132 mm. Recent marbled wrappers. Plates a bit foxed but very good. First Edition, Scarce Offprint Issue of Mason Warren's paper describing the first successful free skin-graft operation performed in the United States; OCLC cites only five copies in North American libraries. "In April 1840 Jonathan Mason Warren of Boston transplanted a whole-thickness skin graft from the arm to the ala nasi and he is credited with ‘filling small breaches of surface with integument entirely detached from the arm or thigh and at once applied on the surface of the defect,' by Pancoast" (Gnudi & Webster, Life and Times of Gaspare Tagliacozzi, pp. 328-329). Warren had already performed the first successful rhinoplasty in the United States, in 1835, after a trip to Europe where he observed the work of Dupuytren, Roux, Dieffenbach and others (see Garrison-Morton.com 5743.3); and in 1843 he performed the first operation for closure of complete clefts of the hard palate (see Garrison-Morton.com 5745). . (Inventory #: 45071)
$2,750.00 add to cart or Buy Direct from
Jeremy Norman & Co.
Share this item
Jeremy Norman & Co., Inc.
Offered by