A fatal form of septicaemia in the rabbit. Offprint 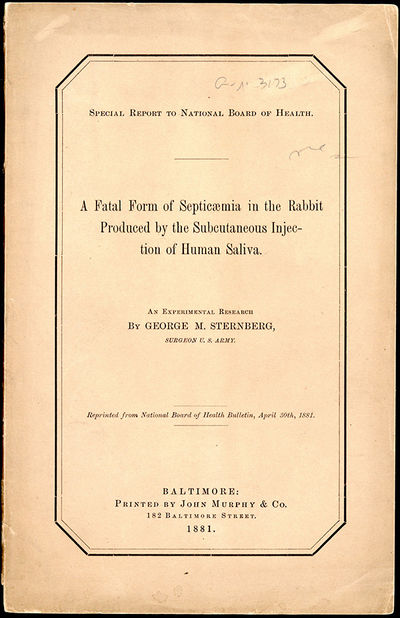 by Sternberg, George M.
Baltimore: John Murphy, 1881. Sternberg, George M. (1838-1915). A fatal form of septicaemia in the rabbit produced by the subcutaneous injection of human saliva. Offprint from National Board of Health Bulletin (1881). 22pp. Plate. Baltimore: John Murphy & Co., 1881. 237 x 157 mm. Original printed wrappers, small split in spine, back wrapper sunned. Very good. First Edition, Offprint Issue. Sternberg, a U.S. Army physician, is considered the founder of bacteriology in the United States. Independently of Pasteur, Sternberg discovered the pneumococcus (Streptococcus pneumoniae, the pathogen causing lobar pneumonia), announcing the discovery in the present paper. Sternberg went on to write the first American manual of bacteriology (Manual of Bacteriology, 1892); he also supervised the establishment of the Army Medical School (now the Walter Reed Army Institute of Research) in 1893 and served as Surgeon General of the United States from 1893 to 1902. Much of his bacteriological research was carried out at Johns Hopkins Hospital. Garrison-Morton.com 3173. . (Inventory #: 45142)
$950.00 add to cart or Buy Direct from
Jeremy Norman & Co.
Share this item
Jeremy Norman & Co., Inc.
Offered by