SIGNALS FROM THE STARS 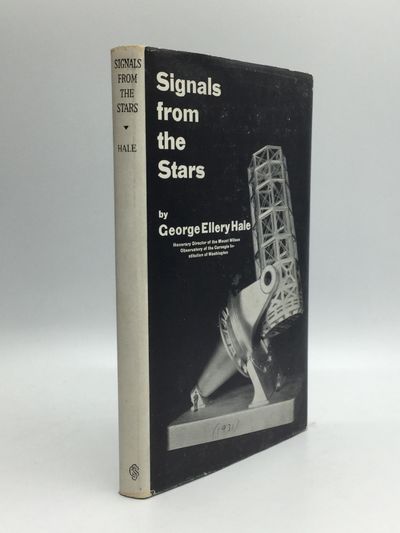 by Hale, George Ellery
New York and London: Charles Scribner's Sons, 1931. First Edition. Hardcover. Very good/Very good. Inscribed by Hale to George Mitchell, Esq. on the front flyleaf. An American solar astronomer, Hale (1868-1938) is best known for his discovery of magnetic fields in sunspots, and as the leader of key figure in the planning or construction of several world-leading telescopes; namely, the 40-inch refracting telescope at Yerkes Observatory, the 60-inch Hale reflecting telescope at Mount Wilson Observatory, the 100-inch Hooker reflecting telescope at Mount Wilson, and the 200-inch Hale reflecting telescope at Palomar Observatory. In this book, he writes "on the possibilities of large telescopes; on the many problems involved in building a telescope which has a 200-inch mirror; on the radiant drama constantly in progress in the sun's atmosphere; on how explosions in the sun may alter the magnetic field of the earth, cause auroras, and affect radio transmissions." Small octavo. Original blue cloth binding, with gilt titles. The spine is leaning just a touch, with a bit of rubbing along the bottom edge of the boards. In the uncommon dust jacket, which is lightly worn with the publication date handwritten on the front panel; otherwise very good. (Inventory #: 69849)
$500.00 add to cart Available from Johnson
Share this item

APOLLO: The Wind, the Spirit, and the God - Four Studies