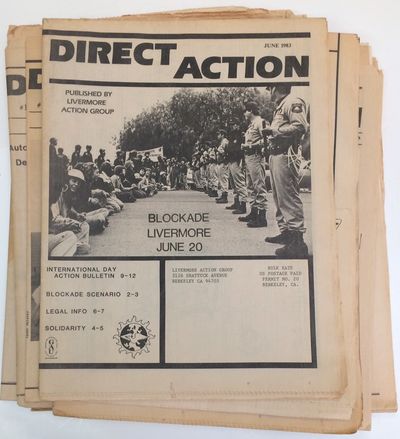 Berkeley: Livermore Action Group, 1983. Eleven issues of the tabloid-format newspaper, generally minor edgewear and toning, a couple of issues more toned or worn. Issues present are an unnumbered June 1983 issue, number 10, an unnumbered Nov. 1983 issue, and nos. 13-20. On street protests and blockade actions in San Francisco, Berkeley, and elsewhere to oppose nuclear power and weapons. Largely devoted to the Livermore Labs but with material on the Diablo Canyon power plant, Native American issues and other topics. (Inventory #: 243117)
$150.00 add to cart or Buy Direct from Bolerium Books
Share this item