The following articles are contained in this bulletin in the following order: 1. Introduction 2. The differences in the PLP 3. The mass line and PL's infantile "left" isolationism 4. A comment on "mass line" & PL's infantile "life" isolationism. 5. Letter to C.D. re: editorial (Tues. march 15) 6. Original editorial 7. On racism in PL 8. Poems on the struggle 9. Speech at all - PLP meet Mar. 23 10. Two reports on U Front submitted to PL NC in 1974 11. Lenin on U Front work 12. Fight sectarianism (by PL NC in 1971) 13. On inner-Party struggle in the Bolshevik Party 14. Letter to C.D. re: "Smash apartheid" pamphlet (Fed. 28) 15. Article on PL's line against national liberation movements 16 Outline of Marxist-Leninist study groups 17. Three "letters of resignation" from PL. 18 Letter on PL's role at the April 2nd march & rally 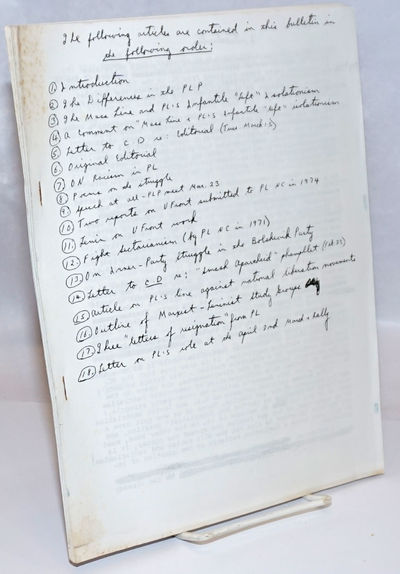 by [Progressive Labor Party]
[San Francisco]: [former PLP comrades], 1977. Pamphlet. [roughly 60 pages], hastily copied and collated, foxing, musty, staples rusting, in poor condition, 8.5x11 inches. "This is a selection of documents that should throw some light on why 72 out of approximately 100 members of the SF Progressive Labor Party resigned from PL in the first two weeks of April 1977" - introduction. (Inventory #: 242755)
$45.00 add to cart or Buy Direct from Bolerium Books
Share this item