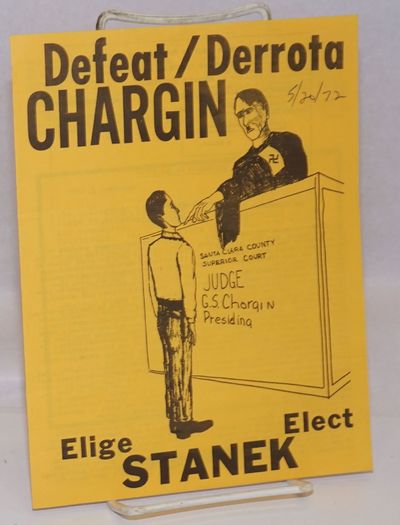 [San Jose}: [Herbert Stanek campaign], 1972. Four-panel brochure, date penned in corner, otherwise very good. Stanek was challenging Gerald S. Chargin, the first Superior Court judge ever to be censured by the State Supreme Court. The brochure reprints part of the transcript of racist remarks Chargin made during 1969 juvenile proceedings against a teenaged Mexican-American boy accused of incest. Among the remarks: "Maybe Hitler was right. The animals in our society probably ought to be destroyed because they have no right to live among human beings." Chargin said that for "Mexican people, after 13 years of age, it's perfectly all right to go out and act like an animal," and added, "We ought to send you out of the country-send you back to Mexico." Deputy Public Defender Fred Lucero, representing the boy, told the judge that "what appalls me is that the court is saying that Hitler was right in genocide," to which Chargin replied, "What are we going to do with the mad dogs of our society?" The cover of the brochure depicts the judge wearing a swastika armband. (Inventory #: 242913)
$30.00 add to cart or Buy Direct from Bolerium Books
Share this item