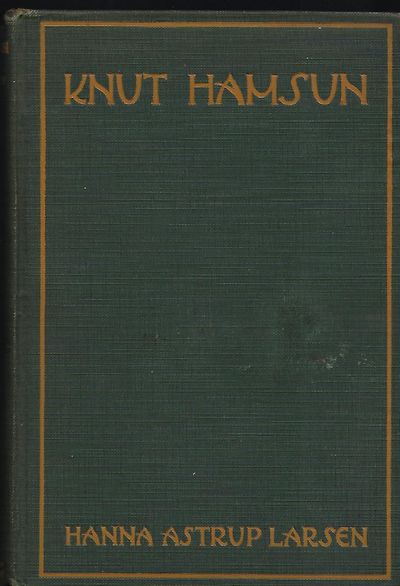 by LARSEN, Hanna Astrup
NY: Alfred A.Knopf, 1922. First Edition. Signed presentation from Larsen on the front endpaper: "For Mrs. Fisk, greetings from the other Little House. Hanna Astrup Larsen. Knollwood Park [NY], March 4, '23." A biography of the Norwegian writer. Larsen was given the opportunity in January 1897, at the age of 24, to join her sister Marie in South Africa at a Zulu Mission Station while accompanied by her uncle and aunt. During her three years in Zululand on the Entumeni Mission, Larsen was able to gain a first-hand knowledge of Zulu culture as well as a collection of objects that were later donated to Luther College. Once back in Decorah in the spring of 1900, Hanna was able to look at the world with a new cultural perspective. A scarce signature!. 12mo., green cloth, stamped in orange; 171 pages. With Four Illustrations. Very Good (little discoloration front cover; some foxing and few browned spots text & edges). Some browning is caused by newspaper clippings (an article by Larsen & an obituary) laid in- now in a plastic sleeve. (Inventory #: 56662)
$125.00 add to cart or Buy Direct from Antic Hay Books
Share this item
Antic Hay Books
Offered by