An act for the government and regulation of seamen in the Merchants' Service ... [drop title]. [With:] Chap. 23. An act in addition to the several acts regulating the shipment and discharge of seamen, and the duties of consuls. Approved July 20, 1840 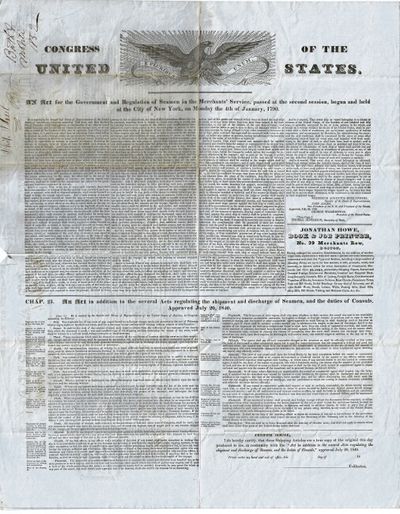 by Congress of the United States
Boston: Jonathan Howe, 1850. Unusually large broadsheet printed on blue paper (approx. 21" x 17"); manuscript docket in the margin, previous folds, one or two short tears; very good. With a wood-engraved eagle (approx. 2" x 6") at the top of the recto and a slightly smaller wood engraving of a sailing vessel at the top of the verso. The recto contains the pertinent acts regarding seamen, the verso containing a ship's manifest: "No ardent spirits allowed on board ... It is agreed between the master seamen, or mariners of the [in manuscript: ship Ariel] of [Bath] whereof [Reed] is at present master, or whoever shall go for master, now bound from the port of [Bath to New Orleans or Mobile, Al]. That in consideration of the monthly or other wages..." The recto prints the full text of the law passed in 1790, together with the 1840 amendment. At the bottom is a small "Custom House" form, blank, to be signed by the collector certifying "that these shipping articles are a true copy of the original..." The recto also includes a printed advertisement for Jonathan Howe, Book and Job Printer, of Boston. Below the printed contract on the verso there is a tabular form containing the signatures of ten seamen and 1 carpenter, all from Boston, with their wages filled in, all witnessed by one L. E. Keyes, and dated in manuscript in the margin, "Bost. Nov. 1852." The positions of Master, Mate, 2nd Mate, Steward and Cook are listed in manuscript but have no signatures next to them. At the conclusion of the text, above the signatories, is a small form stating that the ship is to depart on [Saturday] the [twentieth] of [November] and a second, signed "Patten," stating that if the ship does not sail, the seamen will refund any "advance money." The recto includes a printed ad for William Sawyer's Shipping Office, No. 84 Commercial St., Boston. Apparently rare. OCLC locates a single copy of a variant printing (which they date 1840, likely based on the approved amendment), apparently the same document (contents and dimensions) at AAS, but attributed to the printer Thomas Groom, no. 82 and 84 State St., Boston on the basis of an ad. That space is apparently occupied by the ad for Jonathan Howe in the present copy. (Inventory #: 54948)
$862.50 add to cart or Buy Direct from
Rulon-Miller Books
Share this item

London, printed : re-printed in Philadelphia, with notes, and sold by Joseph Crukshank , 1774
(click for more details about Thoughts upon slavery)
View all from this seller>