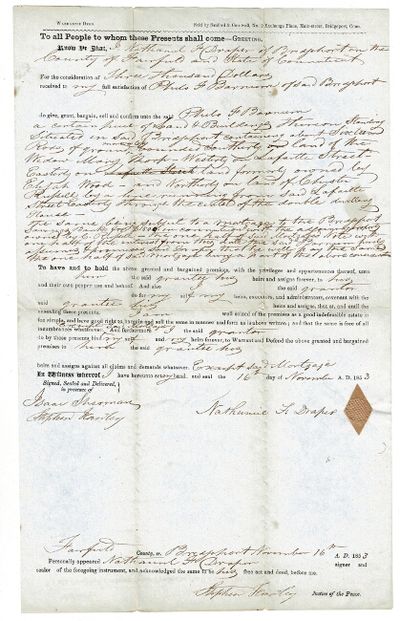 Bridgeport, Fairfield County, Connecticut: November 16, 1853. Pro-forma broadside, approx. 13½" x 8½" filled out in manuscript, signed by Nathaniel F. Draper, Isaac Sherman, Stephen Hawley (Justice of the Peace). and with a small seal; previous folds, docketed and recorded on the verso; very small hole at fold, small tear at fold, no loss. Philo Fairchild Barnum (1806-1878), the purchaser of this lot in Bridgeport, was the half-brother of showman and politician Phineas T. Barnum. Philo was one of Barnum's children by his first wife, Polly Fairchild. The deed shows the sale of a lot bordering land of Mary Thorp on Lafaitte (?) Street near Chester Russell and Elijah Wood. The lot was sold for three thousand dollars, subject to a mortgage of $1500 from the Bridgeport Savings Bank. The seller of the land was Nathaniel Fletcher Draper (1826-1871) who was born in Manchester, New Hampshire. A grocery merchant, he spent a year in Bridgeport, later founding a firm called Blanchard & Draper in Plymouth, Massachusetts, for the manufacture of gloves. The signed witness, Isaac Sherman, was likely the Isaac Sherman (1788-1863) who was the owner of several vessels employed in the Boston and West Indies trade. Sherman was also a local historian, having prepared a series of historical notes on Stratford and Fairfield. (Inventory #: 54950)
$258.75 add to cart or Buy Direct from
rulon-miller books
Share this item

Celebration of the Fourth of July during 18-- [manuscript drop title]