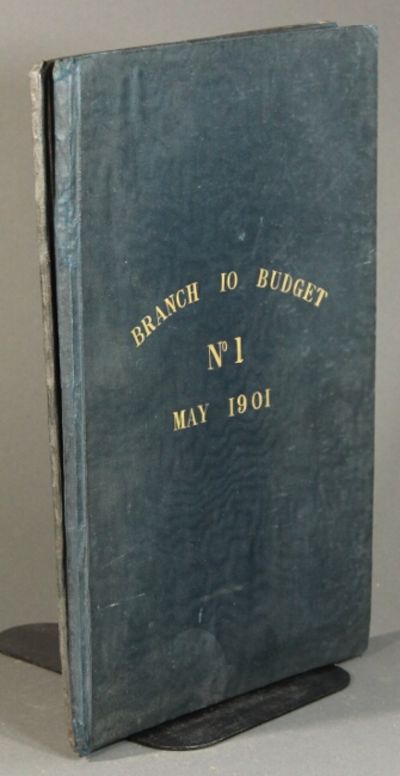 by Branch 10 Budget
Dublin: May and June, 1901. 2 volumes, folio, containing the original manuscripts of 16 articles and 2 editorial notes, 63 and 45 pages respectively, on laid paper of different manufacturers, (one being Ravensbourne Superfine). The editorial notice in the first volume announces the debut: "It is with great pleasure that we present this little volume to an expectant world. Although appearing under a new name it is really the offspring of that brilliant journal, the Netting Room Debating Societys' Chronicle, is, unhappily, now defunct. It was felt that with the suspension of the magazine a nameless void existed in Branch 10, it was felt that latent talent was rusting, that brilliant thoughts were hidden deep in individual minds instead of being openly expressed for the enlightenment of the civilized world..." Oddly, I can find no record of Branch 10, Branch 10 Budget, or the Netting Room Debating Society. Or even Branch Io. Among the articles are: "Hamstead Heath: The Retreat for the Jaded Londoner," by H. B. Holloway; "Sports in Australia," by S. C. Stephens; "The Irish Language Movement," by F. J. Donnellan; "International Mortality," by E. S. Keik; "A Game Played Over," a short story by C. Annead; "My Walks Abroad - I. The Strand," by W. A. Dye; "A Trip Down the Solent," by Percy J. Boxall; "Professionalism in Games," by A. B. Holloway; "The Bleeding of Ireland," by Frederick J. Donnellan; "The Social and Economic Effects of War," by E. S. Kiek; and "The Passing of Robert Louis Stevenson," by P. I., of which the editor writes in his Editorial Note: "P. I. is a known admirer of the gentle R.L.S., and his article would be called by some, gushing. It will, however, be read with interest by those who account themselves, also, Stevenson's friends." (Inventory #: 54688)
$1,092.50 add to cart or Buy Direct from
rulon-miller books
Share this item