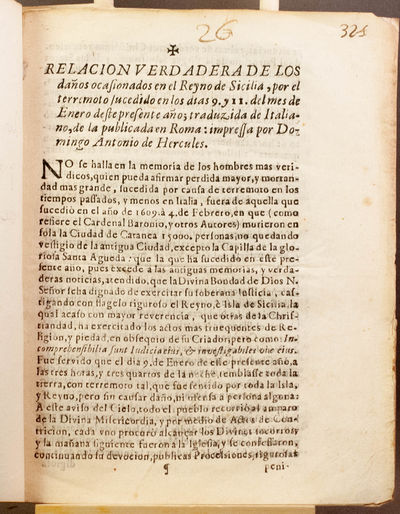 by [Sicilian Earthquake of 1693].
[Pamplona]: [Colophon;] Martin Gregorio [de Zabala], [1693]. Only edition in Spanish. Very Good/The only edition, and the only known copy of the Spanish translation of a news flyer printed in Rome (by Domenico Antonio Ercole) just two weeks after the devastating earthquake that struck Sicily on January 9th and 11th, 1693. Now historically regarded as the most powerful earthquake in Italian history, the twin events combined to reduce to ruins more than 70 towns and cities, and to cause the deaths of more than 60,000 people. The quake completely demolished the city of Noto, leading to the construction on the site of a planned city now considered a masterpiece of the Sicilian Baroque and a UNESCO World Heritage Site. At the time of the earthquake, Sicily was a controlled by Aragonese (Spanish) rule, and so the event affected a Spanish-speaking public in addition to the Italians.. Quarto: text (207 x 156 mm) in portfolio (23 cm); . [4] pp. Bound in later plain paper wraps, the lower inside cover with an unidentified 18th-century line-engraving featuring geometric figures (not associated with the text). Fore-edges of wraps wrinkled and soiled. Interior: Fore-edges a bit ragged, minor stains. Anonymous 19th-century manuscript summary of contents to upper wraps, misdating the pamphlet to 1609. Protected in custom portfolio, using period style decorated paper over stiff boards, with cloth backstrip and magnetic closure. (Inventory #: 6164)
$1,000.00 add to cart Available from
Rodger Friedman Rare Book Studio
Share this item
Rodger Friedman Rare Book Studio
Offered by