So Here Then Cometh Pig-Pen Pete or Some Chums of Mine Being Stories Truthfully Related By Elbert Hubbard About Some Needed Examples of Love, Loyalty, Honesty, and Virtue 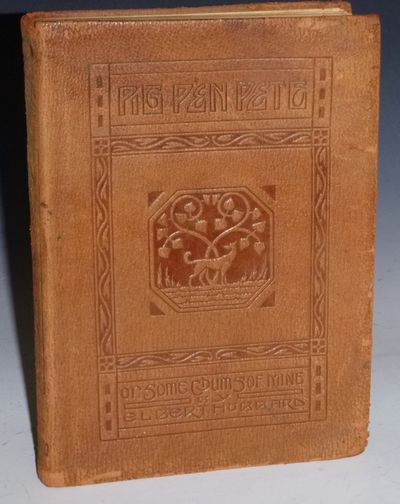 by Hubbard, Elbert
East Aurora, New York: Roycrofters, 1914. Octavo. Since the turn of the century, Hubbard wanted to find something entirely new and experimental. In June 1903, Dard Hunter (1883-1966), then only nineteen came to East Aurora, who designed format, designed the title pages and end pieces and plan the finest typographical layouts. In Hunter's autobiography he describes his training at roycroft and concludes that: "Mr. Hubbard probably had more influence in the development of book-collecting than any other person of his generation" (My Life with Paper, pp. 29-43). Dard Hunter's designs show that he carefully studied the German and Austrian periodicals. His style was a formalized Art Nouveau. This clarity was lacking in the earlier Roycroft books. His work was a departure from the work of Samuel Warner. Even though Dard Hunter left East Aurora in 1910 to continue his studies in Vienna, his borders and spot decorations were used in later editions of the Roycrofter books such as this work which used his designs four years after he left for Europe to further his studies of design. Bound in full pig skin pictorially stamped in blind, decorative blind stamped spine, ribbon marker, damp staining to first few leaves to outer margins, chipping to head with wear to edges. (Inventory #: 027411)
$125.00 add to cart or Buy Direct from
ALCUIN BOOKS, ABAA
Share this item

The Wild Sports of India: With Remarks on the Breeding and Rearing of Horses and the Formation of Light Irregular Cavalry

Boston : Ticknor and Fields , 1860
(click for more details about The Wild Sports of India: With Remarks on the Breeding and Rearing of Horses and the Formation of Light Irregular Cavalry)

Fred's Fresh Start and What he Did By Moral Courage

Boston, Nd(ca.1877) : Henry Hoyt
(click for more details about Fred's Fresh Start and What he Did By Moral Courage)
View all from this seller>