Justinian and Theodora; A Drama Being a Chapter of History and the One Gleam of Light During the Dark Ages 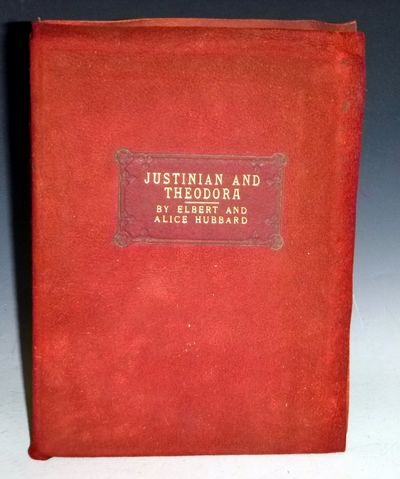 by Hubbard, Elbert and Alice and Dard Hunter
East Aurora, New York; (1906): Roycrofters. Octavo. 107 pages. Since the turn of the century, Hubbard wanted to find something entirely new and experimental. In June 1903, Dard Hunter (1883-1966), then only nineteen came to East Aurora, who designed format, designed the title pages and end pieces and plan the finest typographical layouts. In Hunter's autobiography he describes his training at roycroft and concludes that: "Mr. Hubbard probably had more influence in the development of book-collecting than any other person of his generation" (My Life with Paper, pp. 29-43). Dard Hunter's designs show that he carefully studied the German and Austrian periodicals. His style was a formalized Art Nouveau. This clarity was lacking in the earlier Roycroft books. His work was a departure from the work of Samuel Warner. Even though Dard Hunter left East Aurora in 1910 to continue his studies in Vienna, his borders and spot decorations were used in later editions of the Roycrofter books. The term "eke women" was those many self-sufficient women who came among the hundreds who wanted to work in producing books and furniture in East Aurora which was the center of the Arts and Crafts Movement. Often called the finest design of all Roycroft publications, the title page is black, red, yellow and strikingly modern in its boldness and its daring departures from tradition. There is a clarity in Hunter's designs that is lacking earlier Roycroft books. There is also an angularity to the forms that marks a turning away from the curving organic line of the Art Nouveau. The engravings of Elbert Hubbard and Alice Hubbard are by Jules Gaspard. A near fine copy bound in red suede lettered in gilt, top edge gilt, yapped edges red silk pastedowns, light marginal scattered foxing, Very nice. (Inventory #: 027410)
$150.00 add to cart or Buy Direct from
ALCUIN BOOKS, ABAA
Share this item

An Account of the Manners and Customs of the Modern Egyptians : written in Egypt During the Years 1833-1835

London : Ward, Lock and Co , 1842
(click for more details about An Account of the Manners and Customs of the Modern Egyptians : written in Egypt During the Years 1833-1835)

London : A. Millar , 1755
(click for more details about The Dramatic Works of Henry Fielding (3 voluimes))
View all from this seller>