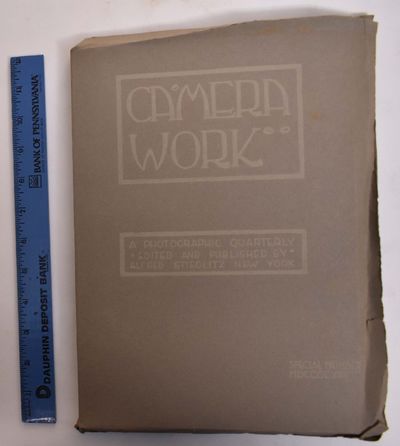 by Stieglitz, Alfred (Editor)
New York: Alfred Stieglitz, 1913. Softcover. VG-, small tears on outside of pages.. Grey wraps with lettering on covers, blank spine. Bound sheets are uncut, 8 bw photographic reproductions of artworks. Famous special issue of this avant-garde magazine published in June 1913 and reporting on the art exhibition known as The Armory Show. The illustrations includes 8 photographic plates reproducing paintings by Cézanne (3), Van Gogh, Picabia and Picasso (3), including the famous Portrait of Gertrude Stein.This last painting, which became iconic, was painted in 1905-1906 in Paris. It was given by Gertrude Stein at the Metropolitan Museum of Art in 1946. Among the articles include Portrait of Mabel Dodge at the Villa Curonia by Gertrude Stein; Speculations by Mabel Dodge, Modern Art and The Public by Gabriel Buffet; The Latest Evolution In Art and Picabia by Maurice Aisen; The Renaissance of The Irrational by Benjamin De Casseres; Audiator Et Altera: Some Plain Sense on The Modern Art Movement, which is the lengthiest article and is written by Oscar Bluemner. In it, he tackles the meaning of the Armory Show (as it has come to be known). After the presentation of the 8 photographic plates, there is a reprinting of an article in French (from "Les Hommes de Jour") titled "Vers l'Amorphisme" followed by an article by John Weichsel titled "Ecce Homo. This is followed by an Announcement concerning the next issue of Camera Work and then the publication concludes with 6 sheets of advertisements and a blank free endpaper. Rare and near-pristine condition. (Inventory #: 173340)
$500.00 add to cart or Buy Direct from Mullen Books
Share this item