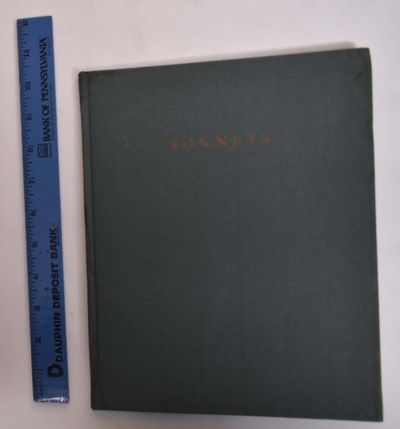 by Sherman, Frederic Fairchild
New York: "Christmastide", 1937. Privately printed in an edition of 75 copies. Hardcover. VG, some foxing to inside gutters, light dampstaining to upper spine sides of sheets last few pages not bad, stain on rear cover is more noticeable. Blue paper covered boards with white vellum spine. 24 pp., 6 bw reproductions (one for each sonnet). An exceedinly small run (75 copies) of this early writing by Frederic Fairchild Sherman. This very well could have been crafted by the author as a give-away for close friends, stating that it was published in New York "Christmastide" 1937 on the title-page. Reproductions of works by Botticelli, Caravaggio, Albert Pinkham Ryder (3) and Robert Loftin Newman. The Newman and at least two of the three Ryder paintings were from the author's own collection, as evidenced by their inclusion in the 1941 Memorial Exhibition of his collection. (Inventory #: 173346)
$250.00 add to cart or Buy Direct from Mullen Books
Share this item