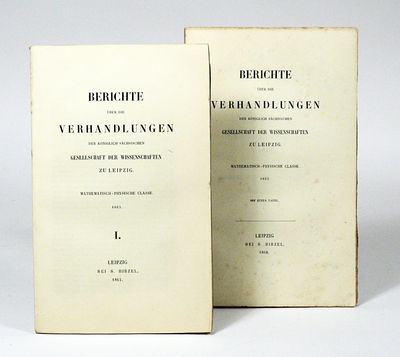 by MÖBIUS, AUGUST FERDINAND
Leipzig: Hirzel, 1865. First edition. Original wrappers. FIRST EDITIONS (JOURNAL ISSUES IN ORIGINAL WRAPPERS) OF TWO LANDMARK PAPERS IN THE EARLY HISTORY OF TOPOLOGY, IN WHICH IN WHICH, AMONG OTHER THINGS, MÖBIUS DESCRIBED THE MÖBIUS STRIP, DEFINED THE TOPOLOGICAL CONCEPTS NOW KNOWN AS GENUS AND ORIENTABILITY, AND SHOWED THAT ALL CLOSED ORIENTABLE SURFACES OF A PARTICULAR GENUS ARE TOPOLOGICALLY EQUIVALENT TO EACH OTHER. The two papers offered here contain three key discoveries that pioneered the branch of mathematics known as topology. 1. The Möbius Strip. "Möbius first described the 'Möbius band' in a paper presented to the Paris Academy in 1861 as an entry to a competition on the theme 'Improve in some important point the geometric theory of polyhedra.' Möbius's paper, written in bad French and containing many new ideas, was not understood by the jury, and like the other papers submitted to the competition, was not awarded the prize. The content of this paper was later published by Möbius in [the two articles offered here]." (Kolmogorov, Andrei N. and Adolf-Andrei P. Yushkevich, Mathematics in the 19th Century: Geometry, Analytic Function Theory (vol. 2) (1996), at 101.) Möbius's notebooks make it clear that he discovered the Möbius strip in 1858, and as noted above he first described it in his unpublished submission to the Paris Academy in 1861. However, he did not publish the discovery until the 1865 paper listed here. Although the Möbius strip will forever bear his name, the mathematician Johann Listing beat him to the actual discovery (two months before Möbius), and to the publication of the discovery. "Working independently, Listing first 'encountered' the surface in July 1858 and published his findings in 1861. However, Möbius seems to have taken the concept a bit farther than Listing by more closely exploring the concept of orientability as it relates to Möbius-like surfaces." (Clifford A. Pickover, The Möbius Strip: Dr. August Möbius's Marvelous Band in Mathematics, Games, Literature, Art, Technology, and Cosmology (2007), at 28-29.) "It is an accident of history that Möbius's name is remembered because of a topological party-piece. But it was typical that Möbius should notice a simple fact that anyone could have done in the previous two thousand years - and typical that nobody did, apart from the simultaneous and independent discovery by Listing." (Ian Stewart, "Möbius's Modern Legacy," in John Fauvel, et al., eds, Möbius and His Band: Mathematics and Astronomy in Nineteenth-Century German (1993).) "[T]he Möbius strip is the ultimate metaphor for something simple, yet profound - something anyone could have discussed centuries prior to its discovery, but didn't. The Möbius strip is a metaphor for magic and mystery, and a perpetual icon that stimulates us to dream new dreams and look for depths even in seemingly shallow waters." (Pickover, op. cit., at 197.) 2. Classification of surfaces. In the 1863 paper, Möbius discussed the classification of closed orientable surfaces in terms of what is now known in topology as their "genus," and showed that any two surfaces of the same genus have "elementaren Verwandtschaften" ("elementary relationships") to each other. (Roughly, "genus" refers to the number of holes in a surface; thus, a spherical surface has a genus of zero and a toroidal surface (donut shape) has a genus of one - as, for that matter, does a coffee cup (the handle is the "hole").) Möbius' theory of "elementary relationships" was the origin of the modern concept of "homeomorphism" - a fundamental idea in topology. Two surfaces are said to be homeomorphic if one can be converted to each other by any strictly continuous process of stretching or bending, avoiding discontinuous processes such as tearing the surface or punching a hole in it. (Imagine pressing a dimple into a donut made of clay, and then enlarging the dimple and shrinking the hole so as to create a coffee cup.) "The classification of compact surfaces was 'known,' in some sense, by the end of the nineteenth century. Möbius and Jordan offered proofs ... in the 1860s. Möbius's paper is quite interesting; in fact, he used a Morse-theoretic approach .... The main interest in Jordan's attempt is in showing how the work of an outstanding mathematician can appear nonsensical a century later." (Morris W. Hirsch, Differential Topology (1997), at 188.) 3. Orientability. In the 1865 paper, Möbius defined the concept of the orientability of a surface in terms of whether the surface can be covered with polygons such as triangles, with each polygon assigned a direction of rotation (clockwise or counterclockwise around the vertices) such that the direction of rotation is the same for any two adjacent polygons. (An equivalent idea would be to assign arrows pointing perpendicular to the surface to each small region of the surface, such that adjacent arrows point in the same direction.) He identified the Möbius strip as an example of a non-orientable surface. (Try making a Möbius strip and decorating it with arrows in the way suggested above. It can't be done - at some point on the strip arrows pointing in opposite directions will meet.) "In fact, Möbius did rather more [in his 1865 paper] than just give a description of the [Möbius] band. His major contribution was to explain how to describe one-sidedness in a way which is independent of intuitive notions. Indeed, his idea was so fundamental that mathematicians still use it as a definition of non-orientability." (Fauvel, at 108.) IN: Berichte der Königlichen Sächsischen Gesellschaft der Wissenschaften zu Leipzig 17 (1865), pp. 31-68 and ibid., 15 (1863), pp. 18-57. Leipzig: Hirzel, 1864; 1866. Octavo, original wrappers. 1865/1866 issue with crease to back wrapper, a little soiling and occasional light foxing; 1863/1864 issue fine. Text largely unopened. Outstanding copies. EXTREMELY RARE IN ORIGINAL WRAPPERS. Note: A custom box is available for an additional $250. (Inventory #: 2307)
$3,200.00 add to cart or Buy Direct from
Manhattan Rare Book Company
Share this item