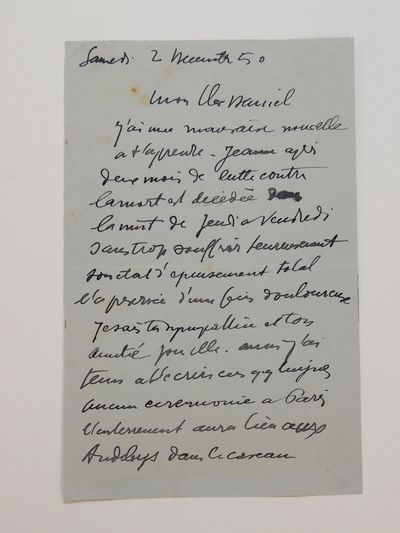 by LEGER, Fernand (1881-1955)
A.D.A. Edita, 1950. unbound. very good. A very heartfelt A.L.S. 8vo. 2 pages, no place, December 2nd 1950, in French (translated), to Daniel [Daniel-Henry Hahnweiler], his close friend and art representative, conveying the sad news on the death of his wife Jeanne, in part: "...I have bad news for you. After struggling against death for two months Jeanne died Thursday during the night; fortunately she didn't suffer too much, a state of total exhaustion saved her from a painful end. I know of your sympathy and of the close friendship you shared... but I still wanted to write you these few lines. There will be no funeral at Paris... but the burial will take place at Andeleys in the family vault. Mu sincere friendship goes out to you, dear old man ... and to your kids." Boldly signed and in excellent condition. French painter and sculptor whose earliest works were a form of Cubism in which he gradually modified into a more figurative and populist style. He is regarded as a forerunner of Pop Art. (Inventory #: 292679)
$1,200.00 add to cart or Buy Direct from
Argosy Book Store
Share this item