Report of the Committee To Whom was Referred The Bill From the Senate, Entitled "An Act Providing for the Indemnification of Certain Public Claimants of Public Lands in the Mississippi Territory." March 15, 1814, Read, and Committed to a committee of the whole house on Thursday next 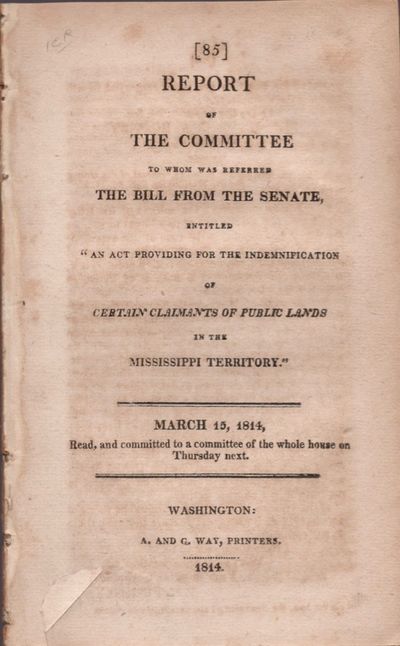 by [U.S. House of Representatives]
Washington DC: A. and G. Way, Printers, 1814. First Edition. Wraps. Good. Disbound wraps. Approx. 8" x 5". 29 pages, [1] page blank, [1]. On page 3 under Report reads, "The committee to which was referred the bill from the Senate, entitled "An act providing for the indemnification of certain claimants of Public lands in the Mississippi Territory." This report list several claims from those who purchased land from Georgia in 1794-95. This report relates to the settlements stemming from the Yazoo Land Fraud in Georgia during the latter part of the 18th century. After the Revolution, Georgia had difficulty protecting its western boundaries from hostile enemies. In 1794 Georgia politicians passed a law transferring 35 million acres at very low prices to prospective companies to establish settlements. Georgia Federalist James Gunn arranged to have the distribution of money and Yazoo lands to legislators, State officials, newspaper editors and influential Georgians. The governor of Georgia, James Matthews, signed the bill into law in 1795. The Yazoo Land Act transferred 35 million acres in present day Alabama and Mississippi at a ridiculously low price of 500,000 dollars to four companies. This land was then sold to speculators and companies willing to build settlements in the area. Georgia politicians were accused of bribery and dishonesty and James Jackson, Senator from Georgia, resigned his seat in Washington and returned to Georgia to fight against this flawed sale. In 1796 the Rescinding Act was passed by the Georgia legislature and signed into law by Georgia Governor Jared Irwin negating the land sale. With Jackson's allies in control of the Georgia Legislature all documents relating to the Yazoo Act were destroyed and officials that passed the the act were denied reelection. In 1802 all lands were given back to the United States. Those that had purchased land went to the highest Courts and in 1814 all settlements were paid by the U.S. Government. (Inventory #: 17769)
$150.00 add to cart or Buy Direct from Americana Books
Share this item

The Golden Bough A Study in Magic and Religion

London : Macmillan , 1925
(click for more details about The Golden Bough A Study in Magic and Religion)

London : Bickers & Son , 1897
(click for more details about A Narrative of the Peninsular Campaign 1807-1814 Its Battles and Sieges)
View all from this seller>