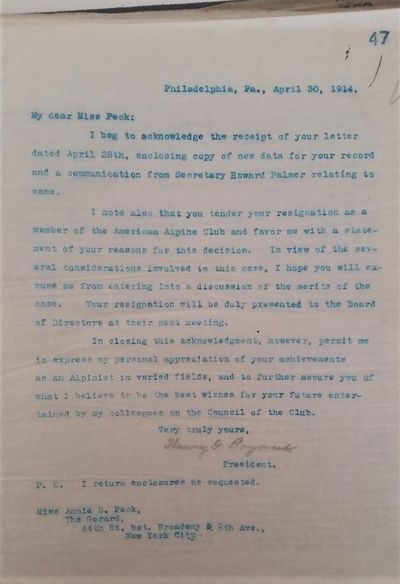 by Bryant, Henry G.
1916. Small folio. 310 x 255 mm. (12 x 10 inches). 302 pp., with carbon and tracing paper copies, index section in front. Many manuscript notes in Bryant's hand. Bound in a "Tokio Letter Copying Book", 3/4 calf, cloth sides, spine very worn; some sheet of tissue creased and a few of the manuscript pages are difficult to read, but text block sound and tight. The American Alpine Club was founded in 1902 and is still today the leading national organization in the United States devoted to mountaineering, climbing, and the multitude of issues facing climbers. These letters contain fascinating correspondence pertaining to ongoing expeditions, the regular publication of the club's Alpina Americana magazine, as well as potential publications. The business matters of the club are prominent, especially efforts to revise bylaws. Most of the letters were written by Henry Grier Bryant (1859-1932), a vice president of the club. Henry G. Bryant was considered one of Philadelphia's most recognized geographers at the turn of the century. He was an explorer who, in 1892, was second in command of the Peary relief expedition and was also a writer with an avid interest in the arctic. His financial independence enabled him to devote his life to expanding geographic knowledge. He was also an officer of the Geographic Society of Philadelphia, and an explorer and traveler to Labrador, Greenland, the Canadian Rockies, South America, and southern and southeast Asia. An example of the content of this archive is a letter from Bryant to Mr. V. Stefansson of the Canadian Arctic Expedition at Herschel Island in Edmonton in 1914 (p.53) states: "I have just received from Dr. Hovey the enclosed newspaper clippings relating to the Crocker Land Expedition, which I hope will reach you before you start for your northern trip. Since Dr. Cook has made himself notorious by his impostures in connection with Mt. McKinley and the North Pole-it seems to be the fashion to question the results of returning explorers. Even Col. Roosevelt did not escape this experience. But Mr. A. Savage Landor, the discredited Tibetan traveller and recent author of a book entitled "Across South America" who questioned the Colonel's results will have difficulty in proving a case...I have recently finished and mailed to Rome a Summary of Geographical Work accomplished by the U. S. from 1889 to 1913...a very laborious undertaking and am heartily glad it is at last off my mind." A letter on p. 47 is to Annie Smith Peck (1850-1935) born in Providence, RI. It concerns her apparently controversial resignation from the club. Annie Smith Peck was a well-known mountain climber, who scaled the Matterhorn in 1895 and made the first ascent of Huascaran in Peru in 1908. One of the peaks of Huascaran is named in her honor. Another woman in the club (with whom there is correspondence) was Mary L. Jobe Akeley, geographer, mountaineer, photographer and writer. She mapped the headwaters of the Fraser River, then returned to the Canadian Northwest to explore uncharted mountains, one of which was later named in her honor. Her first trip to Africa was in 1924 with her husband, Carl Ethan Akeley, renowned explorer, natural scientist, sculptor, photographer and inventor.The American Alpine Club letter book offers many insights into the activities of American explorers at this time. The American Alpine Club's officers were all highly accomplished and affluent men. The then president was Harrington Putnam of Brooklyn, NY, a Supreme Court judge. A vice president was Joseph Nisbet LeConte (known as "Little Joe") the son of Professor Joseph LeConte, the University of California geology professor who confirmed John Muir's glacial theory of the origin of Yosemite Valley. Father and son were charter members of the Sierra Club. Little Joe was a professor of mechanical and hydraulic engineering at the University of California, Berkeley, and made many mountaineering trips in the Sierra beginning in 1887. He made a series of triangulations of major peaks from Mt. Ritter to Mt. Whitney to facilitate accurate map-making. He recounted numerous Sierra Club outings in the Sierra Club Bulletin, both in writing and in some of the finest early photographs available. He died in 1950. The club's councilors included Lewis L. Delafield, the son of LewisL. Delafield, a member of a prominent New York family and a well-known financial and business lawyer who started a law practice in1857. The American Philosophical Society in Philadelphia holds four letter books and three folders of correspondence of Henry G. Bryant's from 1886 to 1911, mostly pertaining to the activities of the Geological Society of Philadelphia and the American Alpine Club. (Inventory #: 411)
$1,250.00 add to cart or Buy Direct from
De Simone Company
Share this item
De Simone Company, Booksellers
Offered by

Maps and Plans Illustrative of the Canals of Irrigation in Lombardy and Peidmont. Printed by Order of the Hon. the Court of Directors of the East India Company

Edinburgh & London : William Blackwood & Sons , 1855
(click for more details about Maps and Plans Illustrative of the Canals of Irrigation in Lombardy and Peidmont. Printed by Order of the Hon. the Court of Directors of the East India Company)

Life on the Lagoons

New York : Macmillian and Co. , 1894
(click for more details about Life on the Lagoons)
View all from this seller>