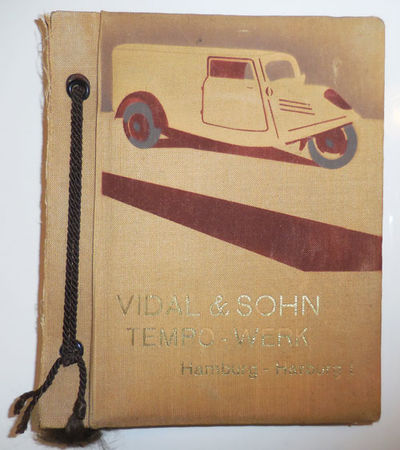 by Automotive; Photo-Album - Vidal & Sohn
Hamburg: Vidal & Sohn, No Date. First edition. Cloth. Very Good. String-bound clothcovered photo-album printed by Vidal & Sohn Tempo-Werke, an automotive company founded in Hamburg in 1924 and continued in existence through 1977. During World War II the company produced small military vehicles. This photo-album was created by the company for the purpose of collecting small black and white photo-cards showing the various models of truck created by the company. The album is not dated. While not completely filled with the photos there are 22 pictures present and all in fine condition. One of the images shows a Vidal & Sohn truck with a swattika which gives some indication of the era from which this album was printed. Handomely illustratedon the front panel. The album is lightly worn, but still easily in very good condition. (Inventory #: 28379)
$450.00 add to cart or Buy Direct from Derringer Books
Share this item
Derringer Books
Offered by