Gradation from a Greenhorn to a Blood 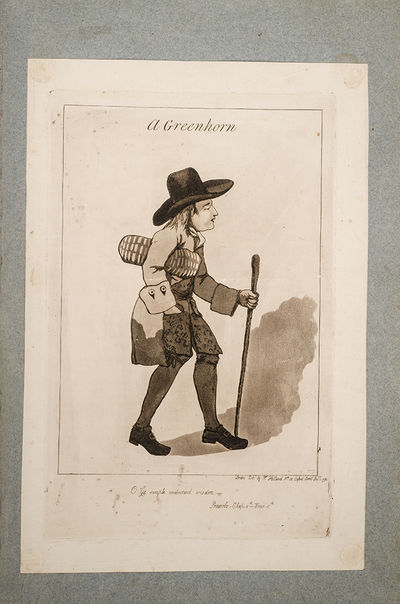 first edition
by WOODWARD, George Moutard
London: William Holland, 1790. To hold, as 'twere, the Mirror up to Nature." (William Shakespeare)
The Rarest of all 'Mustard' George's Publications...

WOODWARD, George Moutard. Gradation from a Greenhorn to a Blood. Altered from an Original Essay, published about the Year 1740; And Adapted to the Taste and Fashion of the Year 1790: With Several Additions; and The Progressive Situations Represented in Characteristic Designs, Exhibiting the following Characters from Life... [London: William Holland, 1790].

A wonderful series of drawings illustrating an article by John Hawkesworth, published in The Adventurer (1753), in which he traces the moral decline from "A Greenhorn", through "A Jemmy", "A Jessamy", "A Smart", "An Honest Fellow", "A Joyous Spirit", "A Buck", and finally to "A Blood".

"For anything so overdone is from the purpose of playing, whose end, both at the first and now, was and is, to hold, as 'twere, the mirror up to nature, to show virtue her own feature, scorn her own image, and the very age and body of the time his form and pressure." (Hamlet - William Shakespeare).

"The text was altered by Woodward from the original essay of 1740
Very rare: Only one copy found, at Yale." (William Gordon).

The Plates:
1. A Greenhorn - (the simple son of a wealthy farmer - a very green country boy...)
2. A Jemmy - (four years later, now a young man void of understanding - he wanders into St. James's Park...)
3. A Jessamy - (he assumes a military air - he peeps through his eyeglass at every female he meets...)
4. A Smart - (he receives his inheritance and assumes an are of greater confidence and freedom...)
5. An Honest Fellow - (he openly declares that there is no enjoyment in life equal to women, friends, and wine...)
6. A Choice Spirit - (he becomes a mimic and sings songs of his own composition in so droll a manner...)
7. A Buck - (his topics of merriment exhausted - he has no other recourse than to mischief...)
8. A Blood - (having mortgaged his estate for more than its worth - he commits highway robbery and is imprisoned...)

George Moutard Woodward (1760?-1809) was "a prolific and popular designer of social caricature much in the style of Bunbury, etched chiefly by Thomas Rowlandson and Isaac Cruikshank... [his caricatures] display a wealth of imagination and insight into character... extremely entertaining" (DNB).

"Another popular caricaturist of the day was George Moutard Woodward, commonly called ‘Mustard George.' Woodward, according to his friend [Henry] Angelo, was the son of a land agent and spent his youth in a country town, where nothing was less known than everything pertaining to the arts. ‘A caricaturist in a country town,' said Mustard George, ‘like a bull in a china shop, cannot live without noise; so, having made a little noise in my native place, I persuaded my father to let me seek my fortune in town.' Thanks to a small allowance from his father, supplemented by his own earnings, George was able to enjoy life in his own Bohemian fashion, and ultimately took up his quarters at the ‘Brown Bear,' Bow Street, where he was able to study the inhabitants of the roundhouse and the regular attendants at the police-court. At the ‘Brown Bear' he died suddenly, departing in character with a glass of brandy in his hand, and was long mourned by his tavern associates." (Paston, Social Caricature in the Eighteenth Century, pp. 137-138).