Relations Between Attenuation and Phase in Feedback Amplifier Design 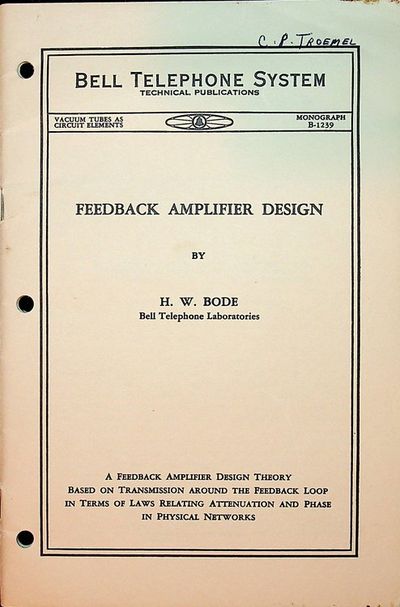 The first separate appearance (here in a later printing) of this seminal paper, in Monograph B-1239 of the Bell Telephone System Technical Publication series. First published in the Bell System Technical Journal, July 1940 based on a presentation given at an IEEE Symposium on Network Theory in January 1940. This paper, Bode's "best known and most succinct contribution to feedback theory," pre-dates Bode's better known work "Network Analysis and Feedback Amplifier Design" by 5 years, and is the first publication on Bode plots. It is a seminal work in the field of control theory.

"Henry Wade Bode was widely known as one of the most articulate, thoughtful exponents of the philosophy and practice of systems engineering - the science and art of integrating technical components into a coherent system that is optimally adapted to its social function...[Bode] in 1929 transferred to Bell [Labs'] mathematical research group...and specialized in network theory and its application to long-distance communications. His extensive research in this field led eventually to the publication in 1945 of his classic book, 'Network Analysis and Feedback Amplifier Design'...During his carrer at Bell, he was granted 25 patents for innovations in the areas of transmission networks, transformer systems, electrical wave amplification, broadband amplifiers, and artillery computing...Bode received many honors during his career. In 1969 he was awarded the prestigious Edison Medal of the Institute of Electrical and Electronic Engineers [IEEE] 'for fundamental contributions to the arts of communication, computation and control and for guidance and creative counsel in systems engineering...With the death of Hendrik Bode, the country and university community lost of of the great engineering philosophers of his time." (Memorial Tributes, National Academy of Engineernig, Vol. 3)

While not known to the average citizen, Bode is well known to engineering students for the Bode plot, which allows engineers to characterize a feedback amplifier and it's useful range of operation. Practically speaking, it helps engineers keep systems from operating at the extremes (like the shrill noise we've all heard when someone using a microphone gets too close the speaker broadcasting their words). Like many things, it was born from his need to solve a specific problem, and finding that after a search of the literature nothing practical existed. "As a consequence [ of developing mathematical methods for designing feedback amplifiers to specified tolerances ] it became possible to design reliable vacuum-tube circuitry, suitable for precision applications [in early computers ]." (Engineering and Science in the Bell System, p 353)

Riverbank Publications No. 50 : The Production and Detection of Messages in Concealed Writing and Images

Geneva, Illinois : Riverbank Laboratories , 1918
(click for more details about Riverbank Publications No. 50 : The Production and Detection of Messages in Concealed Writing and Images)

Riverbank Publications No. 75 : Memorization Methods : Specifically Illustrated in Respect to Their Applicability to Codes and Topographic Material

Riverbank, Geneva Ill : Riverbank Laboratories Department of Ciphers , 1919
(click for more details about Riverbank Publications No. 75 : Memorization Methods : Specifically Illustrated in Respect to Their Applicability to Codes and Topographic Material)
View all from this seller>